We all know King IV for her break-neck approach to music. Her trademark tracks of brutal intensity and energy are increasingly demanding global attention. King IV has been called many things, “an undeniable force”, “a future icon”, “a razor-sharp pop hero”. Now, King IV has once again laced her masterful treatment on a new collaboration with Parisian producer ‘ipon’.

Enter ‘Smackdown’, a thunderous roar of super-colossal drums and all-powerful vocals. King IV has appeared to have met her match for her animalistic approach to music with producer ‘ipon’. The two visionaries have discovered an incomparable sound, it’s beastly demeanour is equal parts catchy and danceable, together with head-banging beats and hypnotising melodies.

True to King IV’s form, ‘Smackdown’ is an accelerated two minutes and forty-one seconds, it is a King IV trademark nonetheless, giving it all and leaving them wanting more.

Following a secret online preview, King IV’s legion of staunchly devoted fans have already responded to ‘Smackdown’ - “King IV has undone and outdone herself”, “This sounds like the vodka and coke I just drank”, and “My wig is gone”.

With lyrics like “No breaks and they can’t seem to catch-up, I’m gonna break everything just to pass ya”, and “Your blisters will blister, you still won’t stop”. We get the feeling King IV is letting it be known that nothing can get in her way, and we’re not sure we want it to. 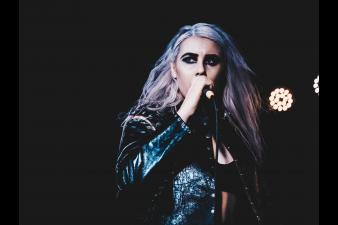 She's back and she's slapping harder than Ric Flair!

She's back and she's slapping harder than Ric Flair!

How's this for a frenzied onslaught of individuality and attitude. Comes at you repeatedly and then ghosts before you know what hit you.

How's this for a frenzied onslaught of individuality and attitude. Comes at you repeatedly and then ghosts before you know what hit you.