It’s with intimate detail that Sydney two-piece kyü piece together their music. Freya Berkhout and Alyx Dennison have a distinct songcraft that yields the most magnificent results, a distinct style and sound that intersperses vibrant melodies amid vast soundscapes. It’s pop as much as it is experimental, ornate as it is raw, classical and contemporary in equal parts. Starting making music together only a year ago, kyü have managed more than most in 12 months. They’ve shared a stage with some of the world’s more interesting pop experimenters (Patrick Wolf, Why?, Tenniscoats, and Australia’s finest at Homebake 2009), won two prestigious competitions (Sydney Uni band comp and the Hopetoun Incentive) and then, above all this, they’ve recorded an album (released by Popfrenzy Sep 18).

kyü are a new-ish experimental pop duo from Sydney who describe their sound as "a tea party with Beethoven, Bowie, Björk and a banshee."

All the album songs were written around the same time last year. They were crafted as a set, rather than individually, because we put our name down for a band competition without any songs to our name as a band. We wrote them in the couple of weeks leading up to it, and at the time there was a really wonderful energy and creative flow, we had no inhibitions or expectations which made for really easy writing back then, and is more difficult to do now. While we've evolved creatively, we haven't tried to evolve those songs at all - a part from a more produced sound on the album, because they stemmed from a really amazing time for us which they capture so well.

Your live shows are creating a buzz – tell us more about what to expect at a Kyu show.

There is definitely room for other band members and more parts and I'm sure some people would consider that an improvement, but personally i think it would lose a lot and it will always be the two of us - asside from collaborations. I think we can come across as a bit petrified on stage, but for us as soon as we start a song we're in place that's just the two of us. We used to practice in this amazing little unused projector room which was really isolated and we could practice there until 5am if we wanted to, and often did. We don't have it anymore, which is really sad, but i think when we play any of the songs we wrote there we are taken back there on a very real level, and at least for us the energy is enormous. Maybe certain people can pick up on that.

Can you tell us more about your influences?

Our friends megastick fanfare inspired us hugely to make music, as well as the amazing movement that was starting in sydney around the time that we started out. They were kind of our introduction to contemporary influence, before that it was mostly classical and world music like Karl Jenkins (which mixes both i guess) that we had grown up with and studied and loved over our little life times. We're daggy in our musical taste. Buuut we've been somewhat enlightened to bands like Grizzly Bear and Animal Collective who transcend fashion whilst being duely popular.

Album in September! Launches in October! US early 2011! Some amazing remixes of our songs from amazing people! Some (hopefully incredible) collaborations with some incredible people! ......... We're so excited about the future!

Grossly underrated. Our favourite bands come from Australia and would no doubt take over the world if they had good exposure anywhere else, there is something really exciting happening here, the world's gonna catch up. 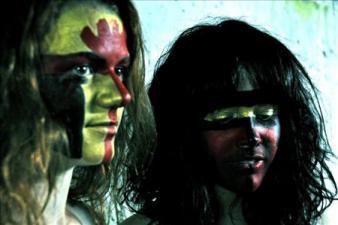 another smashing track from Kyu - in short, Alyx and Freya could be the most exciting musicians in Sydney at the moment

another smashing track from Kyu - in short, Alyx and Freya could be the most exciting musicians in Sydney at the moment