We are In League, a 5 piece Post-Hardcore band from Perth, Western Australia. We are a highly driven band that has organised all of our recording and touring achievements through our own hard work and dedication. We began playing shows in our hometown of Perth in April 2010. 6 months later we landed our first tour of South East Asia making lifetime friendships with people speaking entirely foreign languages, playing first time crowds of 1000+ and securing an endorsement in the Petersaysdenim family. We recorded our first debut full length that same year in our hometown which was then released through InVogue Records (USA) in January 2011. From this album we were nominated for a WAMi award (Western Australian Music Industry) in the hard rock category in 2011, and released music video on YouTube for the single 'This Will Be The End Of Us' which has had a quarter of a million views to date. Throughout 2011, we all worked our day jobs, sacrificed weekends and saved up for an entire year to embark on the recording and touring opportunity of a lifetime. We recorded our sophomore "Sleep And You Might Miss This", produced by Andrew Wade at The Wade Studio in Florida during October/November of 2011 which was self released later in 2012. We currently have our 3rd full length in progress soon to be announced and released later this year.

In the time we have been around for, we have been fortunate enough to have shared stages with industry giants such as: August Burns Red, Blessthefall, Pierce The Veil, Dream on Dreamer, The Amity Affliction, Escape The Fate, Closure In Moscow, Dr. Acula, The Air I Breathe, Northlane, Confession, Deez Nuts, Tonight Alive, Miles Away & more. The tours that took us through the United States, Canada, England, Malaysia and Indonesia were a great success and In League has more than tripled their fan base across the globe. 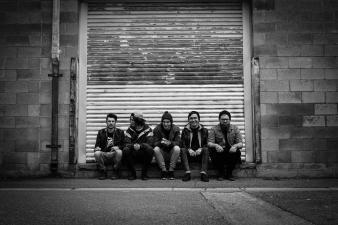 Pretty sure I just heard a band go Super Saiyan.

Pretty sure I just heard a band go Super Saiyan.

We Are All Believers

In a word this is BIG. Can't mess around with this.

In a word this is BIG. Can't mess around with this.