Every Time I Die, The Chariot, Norma Jean, The Dillinger Escape Plan, Converge, Pantera, Botch, Greyhaven, Stray From The Path

Life Pilot are 5 friends from Adelaide, South Australia who play music together. Whilst they may not be operating aircrafts, one thing that is for certain is that they are making the most out of living and doing what set out to do, which is – write heavy angry fast songs and not conform to any trends or bullshit.

It’s this sincere honesty and ruthless disregard for convention that has forged Life Pilot's reputation as a unique and awe-inspiring act. Their music is carefully crafted and executed with masterful musicianship, but still maintaining a raw, unrelenting energy and all the brutality expected from their genre. Their live show is unparalleled. Known for their intense physical display, Life Pilot literally bleeds for their fans, leaving many broken stages, instruments and band members in their wake.

To date the band has self released their 2012 Demo EP, the 2013 Compass Split record with Statues (WA) and their Debut EP, High Noon in 2014 and Sophomore EP, Too Hot For Killing. These releases garnered much attention around the country from Triple J, Local Radio, Blunt Magazine, Channel V, numerous blogs and street press outlets, as well as artist features in Australian Guitar and DrumScene magazines.

Life Pilot has toured Australia multiple times in support of their numerous releases, sharing the stage with many legendary artists along the way. Every Time I Die, Converge, HELL YEAH, Norma Jean, Senses Fail, Kverletak & More, as well as performing at SoundWave Festival and showcasing at BIGSOUND.

2019 saw the release of a pair of singles, 'Dark, Dark, Goose' - a groovy southern flavoured hardcore with the rollicking energy and chunky riffs that the band is known for, and Pretty Like A Pistol: A powerful, dark and introspective anthem that showcases the next era of Life Pilot.

Aggressive Adelaide 5-piece Life Pilot are one the winners of our Soundwave competition. They'll be bringing their blend of metal, hardcore and southern rock to the main stage at Bonython Park, Adelaide at 11am this Saturday 2nd March.

Angus and Jake Long (vocals and guitar) were keen to ditch the 8 string guitar breakdowns and pig squeals from a former band to do something more honest and relevant. This new direction took influence from the music they listen to day to day, which is more ‘Hard/Southern Rock’ like Every time I Die, Pantera & The Chariot. The addition of Eli Green and Nick Evans (Drums and Bass) helped this become a reality; their style was so well suited to this idea, it was like a match made in heaven. Not long after the recruitment of Eli and Nick, Tim Lawrence was brought in as a second guitarist to fill out the sound and bring more metal to the group. As a band we're very diverse in our influences, and we try to create a sound that resonates with people while still making music that is unique and interesting for us to write and perform. Of course, we also love bringing 'the kill' to a live show. We started out a little more straight-up southern-rock than we are now but gradually shifted into doing what felt more comfortable to us under the mantra of "being ourselves". As we found a little more metal creeping into the band it seemed to balance with the southern inspired hardcore sound we were already working with. People have said that we toe a fine line between metal & hardcore and I think that's a fair statement. We're very mindful of what "Life Pilot" sounds like, and we try to stick to it without favouring one genre or the other while keeping consistency in our sound.

You’re one of the winners of our Soundwave competition and are opening the main stage at 11am this Saturday 2nd March. What can Soundwave attendees in Adelaide expect from the Life Pilot live show?

As you can imagine we’re really excited to be given the opportunity to play such a massive festival alongside some of our biggest influences and idol bands. We doubt we’d have won if it weren’t for the support of one Triple J presenter in particular, Stu Harvey who has supported us ever since we sent him our demo. So an official ‘thanks mate’ to Stu, we owe you one. As for the show, you can expect an aggressive, high energy & very physical performance with the big sound to match. We'll be bringing the energy of our small stage show to the mammoth Soundwave main stage and we'll give our absolute all on the day. While we’re doing everything we can to show people who we are and what we're all about, we’ll be having the time of our lives. There's every chance that the show will end with broken instruments and broken band members.

Who are some other bands in the Australian heavy music scene that people should be checking out?

We've got a split coming out with Perth heavy-hitters, Statues, next month. They're a phenomenal live act, extremely talented musicians and we’ve got a lot of love for those boys. Closer to home, we're big believers in the small roster of southern-rock/hardcore bands that have arisen out of Adelaide: Mara Jade, A Ghost Orchestra & One in the Chamber are all excellent bands that deserve to be known and celebrated. In the East we’re quite fond of Safe Hands from Sydney who are stopping off in Adelaide at the end of their national tour to play our Split CD Launch on March 30 and Culprits from Melbourne who impressed everyone at Down & Dirty 2012 in October last year with some great music.

The best advice we've been given and could possible give anyone can be reduced to three simple words: ‘be your self’. It has been said by many people but struck a chord when spoken by Petey Green on something as basic as how to eat a watermelon. This expression has been a motto of the band from the beginning and is instrumental in how we write our songs, perform our material and live our lives.

Obviously, Soundwave has our immediate attention, but also from early March we'll be taking pre-orders for our split with Statues (WA), entitled Compass, which will be released on 13.3.13. We'll be launching that in Adelaide on March 30 at the Crown & Anchor with Safe Hands (NSW), and the other Adelaide bands we mentioned earlier. After the launch we’re looking at touring interstate, as it's something we haven't done with this band and we're itching to do it. There are whispers of a self-funded U.S. tour at the end of the year as we’re keen to reach audiences abroad. Throughout the year we’ll be in the studio, tracking our next EP/Album. Pre-production has already started and we're really stoked on how some of the new material is sounding.

...something to be proud of, and invest in. Australian music offers a lot of diversity and talent within a wide range of genres. The heavy scene is becoming more popular than ever with ARIAs being awarded to heavy acts, and festivals like Soundwave are much more present in the public eye. There are heaps of local acts and talented artists just outside your doorstep that are hard working and more than willing to go the extra mile to make their career a reality. It's worth supporting and worth protecting. We're well aware that we wouldn't be as fortunate as we are without people getting behind independent Australian music. 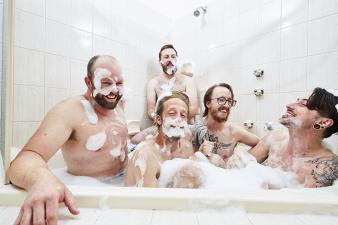 This is gonna sound weird but somehow this is one oft he most danceable songs I've heard today? I'm moving about erratically at my desk rn.

This is gonna sound weird but somehow this is one oft he most danceable songs I've heard today? I'm moving about erratically at my desk rn.

it's like someone slinging barbed wire above their head. don't get in the way because it's fierce and unpredictable.

it's like someone slinging barbed wire above their head. don't get in the way because it's fierce and unpredictable.