As a band, if you’re playing covers for a regular Burlesque night, then you just have to be good - it’s as simple as that. This is exactly how it began for Brisbane’s Little Odessa – they’d sneak in an original or two amongst their high energy covers of Elvis Costello, The Beatles and The Hives while the ladies did their “thing”. However, the thing about these shows was that the feedback came flowing in: support, enthusiasm and inquiries of “Where’s the next show” and “Where can I buy your music?”

So before too long, the four-piece became formally known as Little Odessa, forgoing their former moniker of The Rebel Cosmonauts and, keeping the vibe of these shows that had served them so well, wrote themselves a set full of original stompers and set to work getting these songs out to the world. The shows flowed in thick and fast, shows on boats, shows at high-profile openings and support slots with the likes of Kingswood, The Jungle Giants, Hungry Kids of Hungary, Glass Towers, Velociraptor, The Cairos, The Delta Riggs and Pluto Jonze all helped the band grow from that little band that could, to one that was doing.

And their recorded output pricked a few ears too. Their somewhat throwback sound continued to gel an energetic swagger from the 1950s with a genuine love for pop songs from the 60s and 70s. Their debut single ‘My Girl’ not only won the NIDA/triple j Unearthed competition to have their first video made for them but local Brisbane entity The City Sounds chose them out of 177 other bands to record with ARIA-winning producer Magoo and his Applewood Studios. The first result of these recording sessions came in the form of ‘All Night’, a song that saturated the summer airwaves on triple j. Now comes ‘It’s About Time’, a song that perhaps defies their retro leanings and drags them kick and screaming into something that rewrites what Little Odessa is about - a lot of personality and swagger, a keen eye for sharp songwriting and something that will blow your socks off live.

Get your hips shakin' and hands jivin' to the retro-tinged rock & roll of infectiously fun Brisbane 4-piece Little Odessa.

Little Odessa started as a rock and roll covers band at a burlesque event. We started writing our own material and incorporating them into our sets. Our songs have a different flavour to the covers we were playing but we incorporate the same energy. If you listen closely enough you can hear Chuck Berry and Buddy Holly making love on the studio floor.

What can the crowd expect from a Little Odessa live show?

We pride ourselves on our live shows - we want to be as entertaining as possible. If we (and the audience) aren't drenched in sweat by the end of our set we weren't doin' it right.

"Weaselling out of things is important to learn. It's what separates us from the animals ... except the weasel." – Homer Simpson

We’re going to finish off 2013 with a few more shows, and start preparing for a busy 2014. We plan to have a Music Vid, another Single and our EP out pretty early in 2014 and then were going to try and travel around and play to as many people as humanly possible.

…a force to be reckoned with. 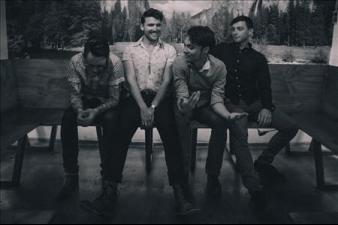 Congratulations to our 6 NIDA winners!

Another cracking tune from Little Odessa. Leaping out with wiry energy.

Another cracking tune from Little Odessa. Leaping out with wiry energy.

I can hear a bit of a nod to 1978 era Elvis Costello. For that alone, they get a nod of approval from me.

I can hear a bit of a nod to 1978 era Elvis Costello. For that alone, they get a nod of approval from me.