In one month Long Island Sound will release their second EP "New Patterns". New Patterns’ raw and intimate atmosphere creates a world where there is no barrier between the listener and the artist. By pushing this barrier aside, Long Island Sound invite you to experience their art not as something to look up to or down on, but as something to become a part of. This EP is an honest experience with the one modest aim of making sure that we communicate as equals with you. We are no longer interested in the ideal concept that is “band guys”. We just want to write music for us and you.

What we play now we sort of just stumbled upon after writing songs for a long time. We’ve been playing together for about four years, so we have written a lot of stuff that no one has ever heard. It’s continuously changing too, I think most of the bands we admire aren’t afraid to change up their sound and evolve as a group, and that’s what we aspire to.

We haven’t played a half hour set in a while so we’re jamming a lot in. I think it will be pretty frantic and we are definitely going to have a lot of fun with it. Hopefully people hear some stuff they haven’t heard before.

What are your hopes and expectations for attending and playing Groovin' The Moo in Maitland?

We just get really excited playing to people who haven’t heard us before. Playing a big festival is every 14 year old musician’s dream so really we are fulfilling our childhood ambitions. Also there are just some huge bands playing, it’s kind of surreal to be on the same lineup as House of Pain.

I think one of the biggest motivations we have had is just to practice more. I’m not sure that someone specifically told us we should—although they probably should have—but it was definitely a conscious decision that we wanted to be as tight as group as we possibly could be. There is a big desire to play new songs as much as possible, but we try to hold new stuff back until it’s really ready.

Tell us about the bands and people in the Newcastle music scene that inspire you.

There are some great bands doing really interesting things in Newcastle at the moment. For a while there it seemed like every band was just playing the same rock music, but I think people got tired of it and started looking for something new. Now there’s some really interesting stuff happening in Newcastle, it’s great to be a part of.

We are just trying to play and write as much as possible. The EP coming out last month was a big milestone for us, it feels like we really have something to offer people now. The songs we are writing now are a bit of a departure from the songs on the EP, we are more confident as a group and with each other so we are able to branch out a bit more. I’m looking forward to showing people what we’ve been working on.

At the moment, it’s really exciting. Australian bands in the more alternative sphere are doing just as well on the international stage as bands from the US or UK. That’s just super encouraging. 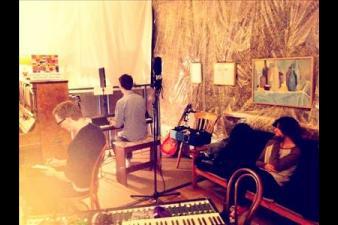 These 5 lucky acts will open Groovin the Moo when it steamrolls in to their paddock.
More
Download the triple j Unearthed app: