The White Stripes, mudhoney, Queens Of The Stone Age

Multiple Australian tours, performances at SXSW, Canadian Music week, Music Matters in Singapore, shows in Hanoi and a five week tour of the USA with a 15 seater van and a George Foreman grill. After cramming all this into the last three years, WAMi Award winners The Love Junkies decided to lay low and get some rest. Taking six months off from performing in the second half of 2016, it wasn’t long before they got the itch to get back in the rehearsal room and start making music together again. Since the start of 2017 they’ve been in the studio working on new material and have re-emerged on the live front with performances including the inaugural City Limits Festival in Perth, sharing the stage with Gyroscope, Jebediah and Alex Lahey, and as main support for Spiderbait at their Metropolis Perth show, fulfilling a long time bucket list item for the band.

Rockin' Perth 3-piece The Love Junkies are the winners of our Southbound Competition. They'll be taking their driving riffs and fuzzed-out guitars to the Sunny Stage of Southbound in Busselton on Saturday 5th January.

I like to think of our music as being an open book. The content is very personal and confrontational at times. The music has to cater for the lyrical content so it turns into a mash up of genres. We love our heavy music and have drawn influences from bands like Refused, Mudhoney and Nirvana but we also love the softer dark side to music so we're all big fans of bands like Radiohead and artists like Gareth Liddiard and Jeff Buckley. I think from trying to express all these different thoughts and feelings in the space of 3:30 minutes, an element of insanity is present in our music haha.

You’re the winners of our Southbound competition and will be playing the festival in the first weekend of 2013. What can the Southbound crowd expect from The Love Junkies live show?

"Don't listen to them. As long as you believe in it enough and work hard enough, you'll be fine". Michael McDonald (my ol' man).

We're releasing our album early in the year and are going tour and play our little sugar buns off. And then record another album :) 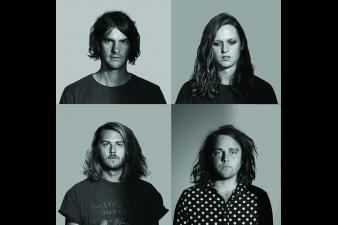 Congratulations to The Love Junkies

The Love Junkies are an indie-rock three-piece from the foothills of Perth, Western Australia.
More

Phwoar, this is a track and a half! (Ironically, it's about half the length of most tracks.)

Phwoar, this is a track and a half! (Ironically, it's about half the length of most tracks.)

Hands down my favourite song at the moment.

Hands down my favourite song at the moment.

I go "whooo!" when I hear this song too.

I go "whooo!" when I hear this song too.