Lurch and Chief two dead musicians one living musician And

Following an outstanding response to the release of their latest single, ‘WE ARE THE SAME’, powerhouse Melbourne sextet LURCH & CHIEF have announced the release of their new EP, WIPED OUT and coinciding tour. Having played their very first show just over a year ago in May 2012, Lurch & Chief formed as a collaborative group of close friends but have since morphed into a prolific dynamo, generating a high creative output with their debut EP, an experimental live sessions release and a further two stand-alone singles in this time. It could be just to say some people may need a little time to catch-up with the fast-moving collective, but those who have cottoned-on early are certainly happy to be part of the elite club of followers. Wiped Out takes its place as Lurch & Chief’s most assured work to date, blending a potent concoction of 60s garage, 90s drone, psychedelic jams while recurrently spiked with killer-hooks and effortlessly tied together by the duelling lead boy/girl vocals of Hayden Somerville and Lili Hall. With tracks here like the lyrically-creepy ‘Mother/Father’, the infectious favourite-to-be title track, the seductive ‘It’s Easy’ and current radio single ‘We Are The Same’ now under their belt, Lurch & Chief are looking to share with the rest of the nation what Melbourne already know – Lurch & Chief are simply a must-see live band. --------------------------------------------------------- LIVE DATES: FRIDAY NOVEMBER 29-SUNDAY DECEMBER 1 | INCA ROADS MUSIC FESTIVAL, VIC w/ Northeast Party House, Gold Fields & more SATURDAY NOVEMBER 30 | THE WOOL EXCHANGE HOTEL, GEELONG w/ The Jungle Giants MONDAY DECEMBER 30 | NYE ON THE HILL FESTIVAL, VIC w/ Loon Lake, Money For Rope, Hayden Calnin, The Love Junkies & more! TUESDAY DECEMBER 31 | THE ESPY, ST. KILDA (VIC) w/ Something For Kate FRIDAY JANUARY 17 | BARWON HEADS HOTEL, BARWON HEADS (VIC) w/ Jebediah SATURDAY JANUARY 18 | THE WHALERS HOTEL, WARRNAMBOOL (VIC) w/ Jebediah FRIDAY JANUARY 24 | TORQUAY HOTEL, TORQUAY (VIC) w/ Jebediah SATURDAY JANUARY 25 | WESTERNPORT HOTEL, SAN REMO (VIC) w/ Jebediah --------------------------------------------------------- "A psych-garage wonderland that transforms and transfixes." - ToneDeaf.com.au “When a track starts and just takes command over your whole entire body, then you know it’s doing something pretty amazing. Lurch & Chief manage that and then some.” - Mismatch.tv “A dynamic and exhilarating live show, charismatic leads and a retro inspired yet forward looking sound, these guys are building hype fast.” - adamNOTeve.net "Confident alternative sounds, towering vocals and a supremely demonstrated mish-mash of influences." - AAAbackstage.com 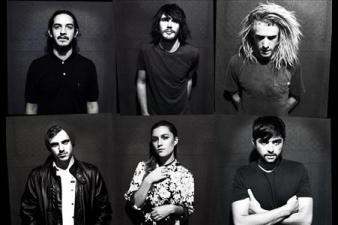 Congratulations to our Harvest Festival winners!

Congratulations to The Murlocs and Lurch & Chief from Melbourne, Tigertown from Sydney, and Brisbane's The Trouble With Templeton!
More

Miss you guys :( Still an all time top track.

Miss you guys :( Still an all time top track.

This has an enormous sound on it, damn dudes how'd you do that??!

This has an enormous sound on it, damn dudes how'd you do that??!

We Are The Same

The Lurch & Chief crew deliver another very large and striking single. They're hitting a very nice stride with each release and this one shows off Lili's wail a bit more.

The Lurch & Chief crew deliver another very large and striking single. They're hitting a very nice stride with each release and this one shows off Lili's wail a bit more.