Indie, Rock - South Queensland, QLD
Followers
Contact Share
No Candy
The Best That This Can Get
King Henrys Little Molly

In June 2012 the Mace & The Motor were chosen to open Triple J’s ‘One Night Stand’ in Dalby. The trio, who shared the stage with Matt Corby, Stonefield, 360 and Temper Trap, were among 350 entrants who entered for the chance to play at the festival that attracted over 15,000 people. The Triple J press released stated: “Mace & The Motor’s Unearthed profile captured our attention with tunes that nimbly shift from no-shits-given rock and roll, with a definite Phil Jamieson & co influence, to a weathered, bluesy twang. It was difficult to ignore the trio and the rocking grunt they’ll add to the One Night Stand line-up”.

In September that year Mace & The Motor ventured to Ian Haugs’ (Powderfinger) Airlock Studios in the Brisbane hinterland to record their first studio Ep with Yanto Browning. The 5 track offering, which includes the single ‘You’re a Woman! Yeah! Alright! Wow!’ is available from iTunes, Spotify, Amazon and JB Hi-Fi.

The bands self recorded debut Ep, from which the track ‘Wanted’ pricked the ears of Triple J, is available from maceandthemotor.bandcamp.com

Over the past 3 years the band has supported Aussie rock legends You Am I and The Hard-On’s and have also locally supported The Datsuns, British India, The Redcoats, College Fall and The Shake Up.

Mace & The Motor exude a passion that jumps from the stage, stomps on your foot and dares you to walk away. Luke, Liam and Mace harbour an arsenal of sticky, wet and deliciously warm rock and roll. Screaming sweet vocals ride a thunderingly tight rhythm section of mature and established tunes which start and finish before you realise you've had your arse kicked.. 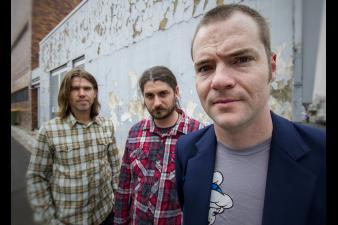 Congratulations to Mace And The Motor!

Mace And The Motor will be hitting the stage to open this year's One Night Stand in Dalby!
More