Maids are a four piece Australian punk rock band from Newcastle, NSW. Composed of Sean Cook (vocals/drums), Matt James (vocals/guitar), Nathan Berryman (guitar) and Dylan Thomas (bass), the band released their debut EP in 2013 and more recently the single “Happy Here Right Now”. Both releases garnered attention from online media and national radio including Triple J. With countless tours under their belt and support slots with DZ Deathrays, British India, Kingswood and King Gizzard and the Lizard Wizard, Maids’ live show has become their defining attribute. Their crunching low tuned guitars and huge drum sound, combined with the mental onstage persona of duo lead singers Sean Cook and Matt James has proved them to be one of the most entertaining acts in the Australian punk rock scene.

Newcastle 4-piece Maids are the winners of our Fat As Butter competition. They'll be taking their driving indie rock riffs to the Fat Stage of the festival this Saturday, October 26 at midday.

Our music is a channel that we try our best to express our individuality through. Each member of Maids has their own thing going on - when we get together we try to balance it all out so our music represents us as who we are at the core. Our musical style is a mix of aggression and tenderness...lots of heavy riffs and driving sections with a counter part that is subtle and melodic. We developed our sound through a lot of experimentation with indie rock, punk and psychedelic vibes. Our main aim in our development was to push indie music into a heavier environment.

You’re the winners of our Fat As Butter competition and will be playing the festival at the Newcastle Foreshore on Saturday 26th October. What are you most looking forward to about Fat As Butter?

Thanks triple j Unearthed :) Playing a festival is a great opportunity for us to give our live show to a larger audience. We love playing live so much and we really enjoy forming a relationship with our crowd. We try to get as intense as we can and lose anything that is going on outside the moment. We encourage our audience to do the same. There are a lot of great bands playing too. It will be a great day.

What can the crowd at Fat As Butter expect from the Maids live show?

We usually sacrifice a goat to the Gods of head banging in our first song. After that we head bang till the last song and then share the goat blood with the crowd. So yeah, expect that and butter up.

Tell us about the bands, producers and people in the Newcastle music community that inspire you?

Newcastle is on the rise at the moment. I think people are pretty inspired. There is a semi-underground scene that seems to be the most consistent. I observe it from afar and there is always a lot of great stuff going on. Special shout out to I Am The Agent too. Those guys are putting on a few shows lately and it seems like a nice little community might be forming. In terms of people in Newcastle - they're great. They don't necessarily go to live shows much, but I can't blame them because the city has been a bit dry in the past few years. Maids have a kind of selfish goal to play a major part in reviving the place and getting people interested again...let's see what happens!

2013 has been a really great year for Maids. We toured our single "Mechanism" up and down the East Coast and have just finished our national tour in support of our EP release. Our guitarist is going away for a bit so the plan is to write as much as possible. We have enough material to get another EP out by next year. I think 2014 will be really busy - another EP and as much touring as possible.

I think Australia is doing great as a music scene independent of the global scene. If more artists were encouraged to focus on a point of difference and less on whatever is trending at the moment (probably talking about the indie rock scene most here), we might be able to become one of the most interesting music communities in the world - the talent is here. Props to Gotye and Tame Impala. They kind of represent the direction I am talking about. 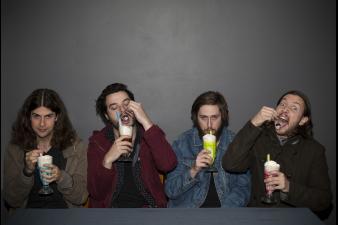 Maids are a four-piece heavy rock band from Newcastle.
More

This is like a super enthusiastic high five that bloody canes your hand but you're not bothered because it made the sickest sound and you're grinning through the throbbing pain.

This is like a super enthusiastic high five that bloody canes your hand but you're not bothered because it made the sickest sound and you're grinning through the throbbing pain.