Majora is a progressive/post-rock, instrumental group formed in 2014 from Newcastle, Australia.

In 2015, Majora released the highly acclaimed EP ‘Iridescent’. The debut EP received exceptional reviews from My Indie Australia, Metal Obsession and praise from many presenters and producers at Triple J, Including music director Richard Kingsmill, Dom Alessio and Zan Rowe.
Triple J Unearthed presenter Lachie Macara named Majora as "One of my favourite discoveries of 2015" and inclusion for his ’Top 10 Unearthed finds of 2015’.

Following on from the ‘Tidal Tour’ in 2016, Majora have performed with Cog, Protest the Hero, The Contortionist, Twelve Foot Ninja, sleepmakeswaves, Tangled Thoughts of Leaving and Closure in Moscow among others.

Majora has come back in 2017 with the release of the sophomore EP ‘Aphotic’.
Co-produced and engineered by Dax Liniere and Forrester Savell (Karnivool, Dead Letter Circus), Aphotic has been described to by Rod Whitfield at The Music as “Thoroughly Kaleidoscopic post rock that ebbs and flows like a king tide” and Alasdair Belling at Kill Your Stereo concluding that on Aphotic “Majora can firmly place themselves with a wonderful showcase of both quality song writing and creative intuition”.

Majora have been on the road throughout October and November on the ‘Aphotic Tour’, co-headlining with Osaka Punch in support of the Aphotic EP and the official music video for the lead single ‘Aphotic’, filmed and directed by Tim Grove.

Newcastle rockers Majora are the winners of our This That competition and will be opening the 'This' stage of the festival on Saturday, October 31 at the Newcastle Foreshore.

Read Interview
Tell us about your music. How did you develop your sound?
Chris: We all have a multitude of different influences and personal tastes musically, and every members style has really helped forge our distinctive sound. We love instrumental music, ambient pieces and film scores as well as many, many variations of metal and rock, and combined with a passion for electronica, hip hop etc, the possibilities of our musical direction are endless. The fans can expect familiar ground of course, but don't expect any hesitations from us to release something a bit more diverse for EP #2, which is currently in the works.
What’s your greatest source of inspiration for making music?
Josh: I found a lot of inspiration for iridescent through researching the universe and the many philosophies surrounding it and the nature of life itself.
Jared: Anything that inspires wonder or awe. At the moment it's the deep sea and the creatures that inhabit it. Theres so much to be inspired by in the world, you just have to open your mind.
You’re the winners of our This That competition and will be taking the stage at the Newcastle Foreshore on Saturday October 31. What can punters at the festival expect from your live show?
Chris: Expect to see some heads roll haha, we really want to go out there and do triple j, This That and Newcastle proud by starting the day off as big and loud as possible. We bring with us the harrowing eyes of a gigantic owl staring down every person to get up front and go nuts! If you want to understand what that means, be there to see it.
What’s the best advice you’ve been given and who was it from?
Josh: My guitar teacher as a teenager told me how important it is to forge your own sound and to keep at it rather than giving up on music after high school, despite how much life can get in the way.
What Australian track would you play to cheer up someone who was crying?
Jared:  I don't know if it'd cheer them up but I'd chuck on "Deadman" by Karnivool. They may still be crying but they'd also be head banging.
What Australian track would you play to someone to make them cry?
Josh: 'A Gallant Gentleman' by Sydney band 'We Lost The Sea'. The latest album 'Departure Songs' is one of the most emotional releases i've heard from this country.
You’re the DJ at a party. The dance floor is pumping. What Australian track do you put on next?
Chris: Its gotta be the song desreveR by White Gums, that song will make a room go from chilled to really buzzing. Incredibly talented producer from here in Newcastle.
What was the last local gig you went to? How was it?
Josh: I saw a few local bands, 'Raave tapes', 'Creo' and 'Dave' play a show last weekend and was pretty happy to hear some interesting new sounds from those guys and a decent room of punters supporting them and the venue. The Newcastle live music scene is at an all time low so its great to see these guys out there giving it a real go.
Tell us about the bands or people in the Newcastle music community that inspire you.
Josh: The guys in 'Ornaments' are bringing a very unique sound to the alt rock genre and are just a great bunch of guys. Also the now defunct 'regresser' were one of the most professional and original heavy acts I've heard for a long time.
What are your plans for the rest of 2015 and into 2016?
Josh: We have booked as many shows as possible up til the end of this year as part of our first tour and are trying to support as many bands as possible to get our music to the right ears. We are playing a huge run of shows along the east coast and couldn't be happier to be touring so soon after releasing our debut ep in August.
We plan finish writing our second ep this summer, and hope to have it out early-mid next year, its coming together really well so far.
View Profile Hide Interview 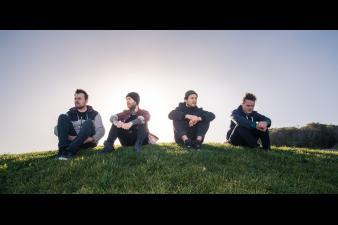 The Newy noisemakers will open up THIS THAT!
More

Heard Dom spin this last night and I had to look y'all up! What a bloody journey hey, so many epic transitions, so much atmosphere. I love it. Looking forward to the EP.

Heard Dom spin this last night and I had to look y'all up! What a bloody journey hey, so many epic transitions, so much atmosphere. I love it. Looking forward to the EP.

Proof you should never underestimate the power of delayed guitar, a technical drummer, and a well-placed crushing crescendo or two. In the right hands, it can make for some devastating music and Majora's got some pretty skilled hands it sounds like.

Proof you should never underestimate the power of delayed guitar, a technical drummer, and a well-placed crushing crescendo or two. In the right hands, it can make for some devastating music and Majora's got some pretty skilled hands it sounds like.