Mangelwurzel (Man-Gel-Wur-Zel) are a six-piece based in Melbourne. The band are renowned for their exciting and unpredictable live shows, a spectacle that needs to be seen to be believed.

Drawing influence from a vast array of styles and genres, they’ll take you on a psychotic journey through new wave, reminiscence to 70s kraut rock noodling, followed by violent swells of post punk noise into sonic gardens of 90s pop power ballads.
Often likened to something, but also sounding like something else, Mangelwurzel will leave you scratching your head in sick perverse pleasure, wanting more.

In the past they have been privileged to support such bands as Pond, King Gizzard & the Lizard Wizard, The Courtney’s (CAN) & Tonstartssbandht (USA).

Mangelwurzel are from Melbourne, but they might as well be from outer space. To see them play is to buy a one ­way ticket on a hurtling freak train, ­one that's as likely to pass through post-­punk and art­-pop song craft as it is to take take detours into ska, rap­-metal and klezmer explosions.

Read Interview
Tell us about your music. How did you develop your sound?
The aliens are in close contact with every member of Mangelwurzel via a special implant in our choccy bums.
What’s your greatest source of inspiration for making music?
We worship all things fruity and in the words of our dear lord Frank Zappa “Without deviation from the norm, progress is not possible.”
What’s the best advice you’ve been given and who was it from?
”F##ck 'em all” - Mum. Still rings true, thanks mum.
What Australian track would you play to cheer up someone who was crying?
'Greg The Stop Sign' by Tism
What Australian track would you play to someone to make them cry?
'Into My Arms' by Nick Cave
You’re the DJ at a party. The dance floor is pumping. What Australian track do you put on next?
'Reckless' by Australian Crawl. Apparently Reckless is used by a night club in Darwin to clear out the punters out at the end of the night, in conjunction with the UGLY LIGHTS, of course.
What was the last local gig you went to? How was it?
Supporting King Gizzard and the Lizard Wizard for GIZZFEST at the Corner Hotel. It was amazing.
Tell us about the bands or people in the Melbourne music community that inspire you.
That's hard because there are soo many talented freaks in Melbourne. The bands that make us super wet are KIRKIS, Sex on Toast, Empat Lima, Clever Austin, Hiatus Kaiyote, Krakatau, BJ Morriszonkle, Peter Bibby...
What are your plans for the rest of 2015?
Before the year is out we will have released a new film clip and our debut album GARY. Not to mention cupping all the sexy buns and blowing lottsa cash on the d floor.
View Profile Hide Interview 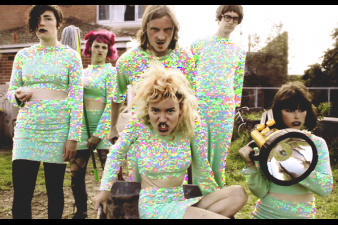 Congrats to our winners!

Banff, Mangelwurzel and Denni are off to play Falls in Byron, Lorne and Marion Bay respectively!
More

The chaos is mostly controlled and all I can hear are six beautiful souls shining.

The chaos is mostly controlled and all I can hear are six beautiful souls shining.