For fans of acclaimed Perth wordsmith Mathas, the last four years have been a quiet time.

Tumbleweeds-through-a-ghost-town kinda quiet. His writing periods seem to go on forever, his releases miles apart. But for anyone who understands the study and depth that goes into writing a single Mathas song, they’re willing to wait. Mathas has always presented quality over quantity, as clichéd as that rings out on paper.

Mathas tends to create conversation starters instead of hard-edged declarative mic-drop moments of finality. His new single Airing Out, however, delivers a touch more directness than you may expect from him.

Airing Out is the first solo single Mathas has released in four years, since the drop and subsequent remix project for his song Bravo Troll in 2016.

In his own words:
“What started as a comedic and autobiographical song about frustrations with my own artistic process ended up as a rant of sorts about how tiresome a lot of the language and humour in rap music has become. I don’t believe in dismissing past art & humour because the world’s changing, nor do I have any arrogant illusions of my own authority in speaking about hip hop from any other country. I do however think it's important for me, in my birthplace, to speak on adjusting our present and future behaviour in support of voices calling for that necessary evolution to happen. We can mouthpiece about being progressive and anti-establishment all we want, but oppressed groups, en masse, are asking for support and we’re still using them as punch-line fodder.”

“Mathas is underrated beyond belief” - The Brag, Sydney
“Distilled Midnight Oil, frozen in carbonite and revived as a synth-loving slam poet.” - Rolling Stone
“The Perth maestro doesn’t get nearly enough recognition for his brilliance.” - The Music, Melbourne
“Mathas is such an engaging performer on stage and just oozes sincerity” - The West Australian
“Unique and mesmerizing” – Tonedeaf

“One of the best MCs out of Perth. Awards are thrown at him from everywhere and he just keeps pumping out though provoking, informative, relevant and above all infectious rap tunes.” – Lewis McKirdy, Triple J

Perth emcee/producer/singer/song psychologist Mathas is a thoughtful and skilled lyricist whose recent tracks have really impressed. He is the winner of our Southbound competition and will be opening The Sunny Stage of the festival on Saturday, January 4.

I’ve been performing and putting out music in Perth for over 10 years now. I suppose I've gradually been shaped into a begrudgingly optimistic pisstaker of world events, the Australian political climate and dietary habits. I guess I just say it as I see it.

You’re the winner of our Southbound competition and will be playing the fest in Busselton, WA on Saturday 4th Jan. What can the crowd at Southbound expect from the Mathas live show?

I’ll be playing out of a briefcase with a giant button attached to it, with some decorative props and a signature onstage goofballishness.

It's been many years since I've played at a festival and also a long time since I last went to Southbound (2010) ... So getting to perform is highly important. I gotta tell you though, I'm pretty partial to the ol’ campers chai tent.

I’ll be putting out my sophomore album Armwrestling Atlas in the first half of 2014. That’s pretty much all I can think about at the moment... just get the frikkin album done.

Get the album done... it's been 4 years since the last one. 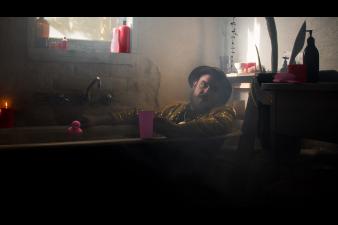 Your trademark whipsmart verses teamed with a brilliantly retro-futuristic soundscape turn cyber life into a dangerous video game, and I can't stop until I defeat that damn troll boss. Awesome.

Your trademark whipsmart verses teamed with a brilliantly retro-futuristic soundscape turn cyber life into a dangerous video game, and I can't stop until I defeat that damn troll boss. Awesome.