He's just played Listen Out in Brisbane, premiered a new clip on RAGE, and now he's our Feature Artist. It's a big week for Midas.Gold.

Read Interview
Tell us about your music. How did you develop your sound?
I’ve been writing for a little while now, and I’ve listened to different genres ever since I can remember, so you could say its a culmination of everything that is me personally/musically. When I started taking music seriously, I’d be hella critical on what I was writing/recording, break it down and pin point what I needed to improve on. Hella straight forward BUT thats how I developed the bad boi.
You were one of the winners of our Listen Out competition and just played the festival in Brisbane. How was that experience?
It was crazy! I never imagined I'd play a festival like that - so it was a trip! I really enjoyed seeing Anderson .Paak, Travis Scott and A$AP Ferg throughout the day - but my favourite experience was just being on stage with my homies and being able to share that moment with them. That was just really special to me. Thank you so much.
What’s your greatest source of inspiration for making music?
I make music and pursue music as a career for different reasons but they are equally as important to me and what drives ya boi Midas !!!
What’s the best advice you’ve been given and who was it from?
I’ve been lucky enough to have had wise heads in my life so its hard to say, but what I’ve learnt most from the people I admire is how to treat people and I feel like that’s worth its weight in gold ;)
What Australian track would you play to cheer up someone who was crying?
000000 - Midas.Gold. Who the F*k Kanye West tho?
What Australian track would you play to someone to make them cry?
UV boi فوق بنفسجي - If She, If He (ft. EASTGHOST)
You’re the DJ at a party. The dance floor is pumping. What Australian track do you put on next?
Rockstar - Carmouflage Ro$e
What was the last local gig you went to? How was it?
Gill Bate$! skkkrrrrrrr!  He always holds it down super polished performer I’ve learned a lot from him!
Tell us about the bands or people in the Brisbane music community that inspire you.
Where to start?!?! There's too much talent here right now, (we hold the torch for hip-hop rn imo). There’s I AM D, Gill Bates, Gallu$, Carmoflauge Ro$e, Erik Sanders, Tides, LimeEyed, James Angus (Jangus), Astro Travellers and like 6-7 acts more that I can’t think of right now and they ALL inspire me to work harder. It’s kind of like that for everybody in BNE, it’s competitive fo sho but the vast majority respect each other. It’s dope that cats are on the same wave length tryna build something, that inspires me.
What are your plans for the rest of 2016 and in to 2017?
I tour with Tkay Maidza in NOV!!!!! I also release my EP in OCT, a few more visuals and I’ve got a few features with some talented artists from around AUS :) maybe a couple more sneaky drops here n there ;)
View Profile Hide Interview 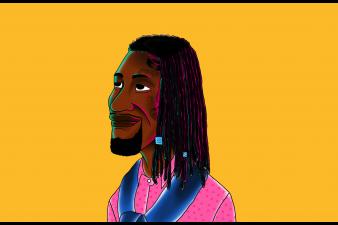 It's a massive shout out to Alice Ivy, Wallace, Midas.Gold and Tobacco Rat
More

I'm vibing on this new mood from Midas! The big hitter goes goes for something a bit more head-oriented rather than your hips.

I'm vibing on this new mood from Midas! The big hitter goes goes for something a bit more head-oriented rather than your hips.

Midas just bought himself some satin sheets and it's transcending across his music now too. Comfort's at a premium here.

Midas just bought himself some satin sheets and it's transcending across his music now too. Comfort's at a premium here.