Good Luck Into It. Over It. weezer Positivity

Good Luck, Into It. Over It., Weezer

Pretty much the same, though probably even faster (much to our detriment). Live shows are really where you can try and up the 'fun' element of the whole affair too.

What’s the best advice been given and who was it from?

I believe a great man once said 'you boo na, you na na'. But in all seriousness, it would be hard to attribute the sentiment to any one individual, though the idea of not taking ourselves or the music too seriously has been a real guiding principle.

You guys are all about spreading your posi vibes (positive vibes). What’s the most posi thing a band member has done? (other than form Milhouse)

Well, in recent memory, Tommy got asked to join an online gaming team that trains twice a week - that was pretty posi! Costin mowed his lawn on Saturday morning (it's the little things...) and I'd wager I've eaten bruschetta about 100 times already this year, which is having a pretty posi cumulative effect.

We've got the launch for our new 7" EP Thrillhouse on Saturday night at Blackwire Records in Annandale with some incredible bands - Crouching 80s, Collapso, and Shadow League. Beyond that we've got a few more shows and tours in the works, and a split 7" with our good buddies Headaches. And another split 7" in 2013... We'd also like to play a show that has Dr Pepper on the rider, but that's real pipe dream stuff...

...very healthy! Very impressive! And proving that 2012 is the year stage diving returned to punk rock! 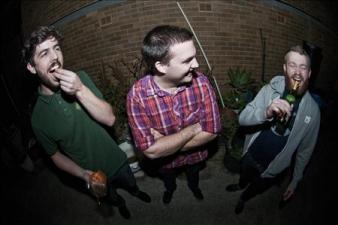 Congratulations to our 2012 NIDA winners!

you've fit so many good lines into this 2 minute understated punk ode.

you've fit so many good lines into this 2 minute understated punk ode.

this is where i come to cry

this is where i come to cry

The comeback that 2018 needed most! Thanks Milhouse for showering your posi-punk glow upon us.

The comeback that 2018 needed most! Thanks Milhouse for showering your posi-punk glow upon us.