Millions are a set of sharp-dressed garage-pop marvels out of Brisbane! At home they've forged a tireless reputation for swoonsome live shows, as well as establishing an arsenal of swaggeringly tasty tunes. The Queensland 4-piece hit the ground running when, not long after forming, they were hand-picked by triple j Unearthed to open 2011's Splendour In The Grass festival at Woodford. Since then they've shared stages with the likes of Unknown Mortal Orchestra, The Grates and Bluejuice, and completed national tours supporting San Cisco Oh Mercy, Last Dinosaurs and Gold Fields. Millions also rang in 2012 with a performance at Brisbane's No Years shindig, and secured themselves slots at the Big Day Out and Falls festivals. On the recorded front, Millions' early songs "Those Girls", "Guru" and "Slow Burner" were all flogged on triple j and public radio alike, and also sparked the attention of UK music bible NME. Their first-ever headline tour in July 2012 to launch debut EP "Nine Lives, Six Degrees" saw the AU Review proclaim them "a handsome, stylishly-matching band with a mature, defined sound to boot." Barely pausing for breath, in November 2012 Millions will unleash their second EP "Cruel", spearheaded by lead-off single "Nineteen" - a stomping glam-pop shuffle that once again was instantly added to high rotation on triple j and was awarded Channel [V]'s Ripe Clip Of The Week. Produced by Malcolm Besley(from Northeast Party House) and mixed by Gordon Raphael (The Strokes' "Is This It"), the 4-track EP is further evidence of the deserved praise that's been heaped on the band in their short but busy existence. Genuinely excited about getting to work with Millions on this release, American producer Gordon Raphael enthused "Their approach to the sound is huge, imaginative, and not afraid to shine. Millions are very much capable of creating amazing lyrical songs that have as high a level of interest and power as any true music fan could crave. I can't wait to hear more from them." Following appearances on the Falls Festival tour over new years with the likes of Beach House and The Flaming Lips Millions took some time out of performing live to write songs for their debut album. They have just recently completed a sold out Australian tour with Perth band San Cisco and are looking to tour America in september and October before bunkering down to record their debut album. "Millions are the best prom band in Australia." - Dom Alessio, triple j "They're young, handsome and loud." - Alexander Gow, Oh Mercy "Very tidy swagger, guys! Thoroughly charming." - Zan Rowe, triple j http://www.millionsmusic.com UPCOMING SHOWS JUNE 16 - VALLEY VIBES W/ DZ DEATHRAYS, GUNG HO & MORE - BRISBANE ALL AGES - FORTITUDE VALLEY PCYC JUNE 29 - CONVERSE 'GET LOUD' SHOW W/ SCOTDRAKULA - MELBOURNE - 18+ - RSVP TO CONVERSE GET LOUD

Brisbane 4-piece Millions are the lucky winners of our Splendour In The Grass competition and open the main stage this Friday morning. Wow!

Just listened to a lot of Black Sabbath and thought you know what? We can do this.

You’re the winners of our Splendour In The Grass competition and will be opening the main stage this Friday. What can the Splendour masses expect from the Millions live show?

Some furious guitar windmilling, Campbell loves to shake his hips, Dom does a good MJ moonwalk and James plays drums with his feet and pedals with his hands.

What are you hoping to get from the experience?

Hopefully Campbell might score a lucky lady for once... Mainly just to have the best time and enjoy it for all it is, maybe try and get a band photo with yeezy.

Mainly just our bros. We have a sick little music community popping in Brisbane. We're great friends with The Cairos, Last Dinosaurs, Dune Rats, Bleeding Knees Club, DZ Deathrays, Mitzi and Gung Ho... kind of like a little Gang of (more than) Four. Producer wise we love Cam Smith at Incremental Records. He's done all of our recordings so far and he's cheap, gets a good result and likes Steve Albini, what could possibly go wrong?

We're formulating all our plans now but it's looking to be very busy indeed. Going to be dropping an EP really soon then doing alot of touring - exciting stuff! 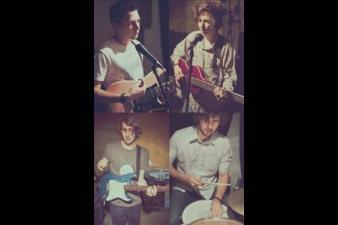 They'll be opening the main stage of Splendour In The Grass 2011.
More

I was gonna give it 4 stars but given I've replayed it five times in the last 10 minutes I think it deserves full marks! Love the surf intro, the bounding energy and the super fun vibe. Great work, you lot!

I was gonna give it 4 stars but given I've replayed it five times in the last 10 minutes I think it deserves full marks! Love the surf intro, the bounding energy and the super fun vibe. Great work, you lot!

Yep, another quality tune from Millions. Opened perfectly with that surf-guitar riff and a great tale of unrequited love. Ace.

Yep, another quality tune from Millions. Opened perfectly with that surf-guitar riff and a great tale of unrequited love. Ace.

sorry what was that? too busy catching some barrels in the green room while listening to the new track from Millions which is ruling.

sorry what was that? too busy catching some barrels in the green room while listening to the new track from Millions which is ruling.