Enticing Melbourne rock fans to unfold their arms and move toward the stage is a challenge few bands meet. The average rock’n’roll outfit rarely evokes a punter’s desire to really move. Dancing one’s arse off, what’s more, is a rockeratti myth - rumours of rock-induced gyrations waft out of closed-door venues and after-parties but it’s seldom seen in the public bar. Money For Rope reject this history. They’ve never seen it at their shows. Their crazed rock’n’soul surf garage parties always transform a stoic and cynical crowd into an exuberant force on par with the band’s own rabid energy. The jaw-dropping energy of two drumkits, two guitars, a bass, four voices and keys command the response of an electrified room and, Jesus Christ, do they get it. They got it when they supported The Vasco Era, The Mess Hall, Those Darlins, Even, The Meanies, Celibate Rifles, Bob Log III, The Cruel Sea, Wolf & Cub and Fearless Vampire Killers. They got it when they played to thousands at Splendour In The Grass, Cherry Rock, and the legendary Reclink Community Cup. They’ve been dreaming of getting it since they first heard Sunnyboys, Radio Birdman and The Saints. Money For Rope’s debut single “Slow Dance/No.18” was snatched up by MajorLabel for digital release in 2010; second single — “My House or Yours/Six Gun Johnny” — was pressed onto 7” vinyl for a sell-out launch at The Old Bar; somewhere in between, the six men picked up Best New Artist nomination in The Age’s EG Awards and completed a whirlwind east coast tour. The third 7” record to spill out from the melee — “I've Had Days/December”, recorded at Newmarket Studios, mixed by Callum John Barter (British India, Mike Noga & The Gentlemen Of Fortune, Gun Street Girls, The Pictures) — is now proudly rolled out on Barely Legal through Fuse Music. Money For Rope are coming for you next. They’re good and they mean it. *** “This is one band that draws the crowd in with their energy and charisma, and make it impossible to stand still.” - Tone Deaf, June 2011 “Money For Rope really rocked it. The energy they have for their music and their high-octane stage antics ensured my exhaustion and won over the audience.” - The AU Review, April 2011 “One wonders how the headliners of the evening will follow this wonderful spectacle.” -FasterLouder, July 2010

Money For Rope are the winners of our PUSH OVER competition. The Melbourne band with TWO drummers are also our feature stars this week. They'll be heading to the festival at Melbourne’s Abbotsford Convent on Monday 12th March.

The key to our sound really lies in the guitars and vocals. Very crunchy, very powerful and very catchy. Also, the keys add another layer to what we’re doing texturally. And with two drummers, it gives us an opportunity to pull off some really unique rhythmical stuff that a lot of bands could only do in the studio with overdubs.

You’re the winners of our PUSH OVER Festival competition. What can PUSH OVER revelers expect from the Money For Rope live show?

Hits, hits and more hits. And a lot of energy. I won’t give too much away for those who haven’t seen our shows before. BUT. Bring Gatorade…for us… Please.

What are you most looking forward to about PUSH OVER on March 12th? Who are you psyched to see?

I think mostly we’re really looking forward to playing alongside some great names at the convent. It’s a great space and an even greater lineup. We have played shows with Eagle & The Worm, Red Coats, Yacht Club DJ’s and 8 Bit Love before so it’ll be a great chance to catch up. Also looking forward to seeing how Parkway Drive and 360 work the crowd.

We’ve just recorded an album with Steve Schram. He’s worked with some incredible bands (Vasco Era, Clairy Brown, San Cisco) so it was great to hang out and get his spin on our tracks. The album should be out in the next six months. Apart from that, we’re shooting a video and playing as many shows as we can.

A massive (and growing) part of the worldwide music industry. Look at Gotye. His success internationally has really shown the world that we’re a creative force to be reckoned with; and his drive and passion are going to inspire a lot of young creative minds. 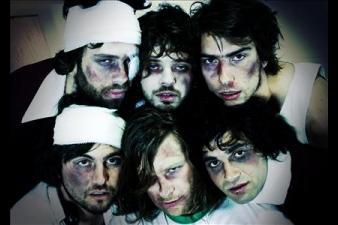 Congratulations to Money for Rope!

Money for Rope have a reputation for their crazed rock’n’soul surf garage parties. With the energy of two drumkits, two guitars, a bass, four voices and keys they are sure to whip the all ages Push Over crowd into a frenzy.
More
More Reviews
Download the triple j Unearthed app: