Sound influenced by their hometown Perth, Western Australia, Mosquito Coast have had over four million streams on Spotify, five singles added to rotation on triple j, completed three national headlining tours, toured the country with Northeast Party House on their sold-out Calypso Beach tour and appeared at festivals such as BigSound, Southbound, Lost Paradise, NYE on the Hill and Groovin the Moo.

Naomi and Conor were still in high school when they caught the attention of fans and tastemakers after winning triple j’s Unearthed High in 2015, from a pool of more than 850 artists and 1200 songs. Their breezy pop single, Call My Name just missing out on the Hottest 100, coming in at #101 - a huge achievement, given their newcomer status.

Not ones to rest on their laurels, they released their next single Commotion - a kaleidoscopic groove recorded at ABC studios in Sydney by ARIA-winning producer Greg Wales. In 2016, a six-track EP Television Love, produced by Carl Fox and mixed by Jack Moffitt (The Preatures) was unleashed onto the world, featuring singles Let’s Be Friends and Television Love.

In early 2018, Naomi and Conor travelled to New York City to record their debut album with renowned French producer Nicolas Vernhes, who’s worked with some of the world’s most inspired artists including Moodoïd, The War On Drugs, Animal Collective, Dirty Projectors and Deerhunter.

Nicholas and his now closed Rare Book Room in Greenpoint, Brooklyn (Mosquito Coast were one of the last bands to record in this legendary studio) had a huge influence on the album’s sound, the duo spending and intense 12 out of 14 days recording.

Following on from their single Skipping Girl released in August 2018 came Sweet Talking in January 2019. The third track from the album, Scorpio, will be released alongside their highly anticipated album titled, Kisses; an independent release out on 18 October 2019 via The Orchard.

Their debut album is an ode to every person they’ve kissed; a warm and dreamy coming-of-age story designed to be listened to from start to finish, as all great albums arguably should be. 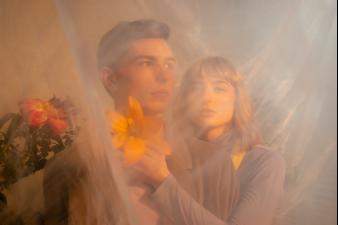 The Perth duo stepped out of the basement and into your hearts.
More