Australian hiphop has berthed new mc/producer duo. Introducing Born Fresh' latest signing Mr Hill, and Wagga Wagga's hottest up and coming producer Rahjconkas. The two have linked together for the release of a full collaboration album called "The Feedback. Released in summer 2012. The album has been gathering momentum at a great rate since the project began in September 2011 and has called upon some of Australia's most notable hiphop figures for guest appearances. Such as Trials (Funkoars), Hau (Koolism), Jeswon (Thundamentals), The Tongue, Phatchance, Dj Joyride, Seven, and 4th Degree (Vegas Aces). The Feedback is set to be a powerful release from the young duo, whose focus and hunger can be seen through the music they have worked so hard to produce. The first single "Warning Signs" can be previewed and downloaded for free from their Triple J unearthed website. "THE FEEDBACK" IN STORES JAN 27TH THROUGH OBESE, AUSTRALIA WIDE.. GO GET IT here : http://itunes.apple.com/au/album/the-feedback/id498907211 The two have recently scored spots touring with The Funkoars, Opening up for Atmosphere and Evidence, also touring with Illy and Seth Sentry all in 2012 alone. Not to mention being asked to produce an original song for Obese Records second compilation cd Obesecity 2. Mr Hill and Rahjconkas were also in the top 6 finalists for the Triple J Hilltop Hoods remix competition. They have been featured on Triple J unearthed radio as well as their debut album "The Feedback" made feature album on the Hiphop Show. A second album has started forming and new songs will be availavle for download soon. The first single released from the new album is called Put The Work In.

Mr Hill & Rahjconkas are the winners of our Sprung Festival competition. They'll be joining the massive line up of Australian hip hop at Brisbane's RNA Showgrounds on Saturday November 10.

Originally Rahjconkas contacted myself (Mr Hill) asking me who produced for me. At the time I was snaking beats from anyone I could. He sent through a couple of beats straight away and we instantly connected. His production style was exactly what I was chasing and he seemed to like what I did with his music. So after a few draft songs being sent back and forth, I formally asked Rahjconkas to make a collab album together. I guess the momentum we have gained has locked us into an exclusive duo now. Kinda like Muph & Plutonic.

You’re the winners of our Sprung Festival competition and will be playing Brisbane's RNA Showgrounds on Saturday 10th November - what are you hoping to gain from the experience?

Firstly, thank you so much for the opportunity to play at this festival. I went last year as a punter and was totally blown away by the quality of music and size of the show. To have the majority of Australia's most successful hip hop artists in Brisbane at the same time was amazing to see. I hope that from playing the show we can show a few more people who may have not heard of us what we do, and possibly impress the right people so that we can keep expanding this music thing. I'd love to be booked again, for any festival.

What can Sprung punters expect from the Mr Hill & Rahjconkas live show?

Crazy, high energy hip hop from young cats with nothing to lose. Im 25, Rahjconkas is almost 23 and our kick ass Dj, Dj Da Rin (J-Frankie) is 18 years old. I've played over 50 hip hop shows this year and only around 7 or 8 were for headlining shows, so we have the support act "hype the crowd" thing down pat.

Tell us about the bands, producers and people in the Australian music community that inspire you.

Well I can't answer this for both of us, but personally I am incredibly inspired by Suffa from Hilltop Hoods - his production and raps are always next level, always so creative. Trials from Funkoars also blows me away with his raps and production. Drapht and The Thundamentals are massive inspirations for me - their flow, their character - so dope! Another big inspiration is a good friend of mine DJ Butcher, the guy is so musically diverse and talented, everything he is doing music-wise I instantly love. Seven is also an inspiration of mine, the mans drive and ethic is so good to be around. You can't help but want to follow your dream when you're around him.

The rest of 2012 is looking quite busy, which is great news! Originally we were already booked to play at the Sprung After Party so now we have 2 shows that day. The next week we'll be performing with Spit Syndicate in Sydney for the launch of their new single 'Beauty In The Bricks'. There is also a small run of shows with Seven and Melbourne rapper Allday. Hopefully 2013 there will be more tours. Rahjconkas and my second release, 'Dead End Street', is looking like being released in the early parts of 2013 (release date tba).

...amazing and inspiring! I love where I'm from and what we all represent. We live in the best place on earth. 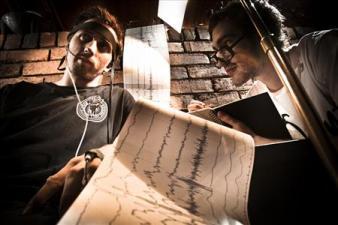 Congratulations to Mr Hill and Rahjconkas!

Previous finalists in our Hilltop Hoods remix comp, Mr Hill (MC) & Rahjconkas (beats/production/vocals) have returned with the brand new single from the forthcoming album 'Dead End Street' and it's a jam.
More

Put The Work In

Seriously hard working duo and this single's appropriately themed. I'm all over this goodness.

Seriously hard working duo and this single's appropriately themed. I'm all over this goodness.

Put The Work In

Another top effort from this duo. I do feel they have a bright future if they do continue to put the work in. Keep going hard, boys.

Another top effort from this duo. I do feel they have a bright future if they do continue to put the work in. Keep going hard, boys.

The dudes are back in a big way. Dead End Street signals a big year for Mr Hill and Rahjconkas. A towering beat once again and all the raps push to the front, making the most of each bar.

The dudes are back in a big way. Dead End Street signals a big year for Mr Hill and Rahjconkas. A towering beat once again and all the raps push to the front, making the most of each bar.