New EP 'In Transit' OUT NOW! get it at https://nastaij.bandcamp.com

Melbourne emcee Nastaij (pronounced Na-stay-sh) has firmly cemented herself in the hip hop community over the last few months.
Since the release of her debut EP 'The Warehouse Sessions', Nastaij has gained international recognition after taking out categories in the 2013 and 2014 Right Out Tv Awards, and won RAW Artists Byron Bay musician of the year.
Her lyrics are fresh and positive, and her delivery turns heads where ever she performs. Nastaij has shared the stage with Alison Wonderland, Ozi Batla, Remi, Dawn Laird, Coda Conduct and Sydney's Sky High. Nastaij has recently teamed up with some of the finest musicians the Northern Rivers has to offer, and the band is already wowing audiences.

Not only a lyricist, Nastaij spends countless hours in the studio making beats and layering sounds to bring you a completely original flavor that has been inspired by years of touring nationally as a drummer for acts such as Toni Childs (USA), folk/indie pop band The Lucky Wonders (Byron), rock band The Argonauts (Northern Rivers) and indie band Hello Satellites (Melbourne). Its this diversity that has allowed Nastaij to explore many different avenues of sound and genres, and push the boundaries of conventional hip hop. Nastaij completed her bachelor of contemporary music in 2013, majoring in audio engineering. This has furthered her hunger to record and collaborate, adding to her growing list of achievements. Also notable, Nastaij was nominated for a 2013 NCEIA Dolphin award and was runner up in the Hip Hop division of the 2011 Lismore young songwriters awards with her track "Hop Skip Jump" that was also nominated for song of the year. The track also spent numerous weeks topping the Triple J unearthed Hip Hop charts.
Get on it! 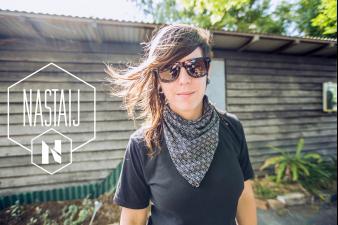 Yeah Annie! Did exactly what Nina suggested and slowed it down for this one and it's such a strong result. Your production keeps getting stronger too.

Yeah Annie! Did exactly what Nina suggested and slowed it down for this one and it's such a strong result. Your production keeps getting stronger too.