Electrifying, cinematic and delivered with intergalactic gusto - Nice Biscuit are the storm that breaks the heat of a summer’s day. Through rolling guitar solos, walloping bass riffs, and the double-barrel harmonies of front women Billie and Grace, the band create a psych-pop haven of their very own, ripened under the sweltering Queensland sun.

Nice Biscuit began in the pursuit of a common goal, and was born in a Mullumbimby barn. After being invited to play a one-off performance at a party on a property, a set of friends and acquaintances met to rehearse in the Spring of 2016, naming their project on a whim after a snack they shared. That first show did more than exceed the expectations of mates. From that night, the Nice Biscuit chimera was alive, kicking and refusing to rest its head.

The combination of characters which form Nice Biscuit bring the band its quality, bonded in awareness that they’re greater than the sum of their parts. Nice Biscuit is Ben Mulheran (guitar, keys, harp, vocals), Billie Star (vocals, guitar, percussion), Grace Cuell (vocals, guitar, percussion, keys), Jess Ferronato (guitar, vocals), Kurt Melvin (drums) and Nick Cavendish (bass). The songs begin on guitar by either Billie, Grace, Jess or Ben, fleshed out with individual parts contributed by each member after plenty of deliberation and more sweat. Grace and Billie attribute their vocals and harmonies to their past spent in choir, and being raised on a healthy diet of folk. These sessions saw the release of early singles ‘Boogie Board Muck Around’ and ‘In Space Today,’ the latter of which was added to rotation on FBi 94.5, and saw airplay across community radio and triple j.

The holistic ethos of Nice Biscuit as a collective is on full display in their live performance. Momentarily, the microcosm is exposed and Nice Biscuit invite the onlooker into their world of jams tinged with the colours of 70s Krautrock, psychedelic surf garage and a pinch of pop. “We’re a bit different from the stock standard lineup of two guitars, bass, drums” says bassist Nick Cavendish, “We take a step back and freak out on the composition whilst Bille & Grace lead with keys, shakers, tambo and guitar”. Matching costumes join synchronised movements, and a hive-mind consciousness that spreads to the crowd - the Nice Biscuit live experience is immersive, visceral and never void of purpose. “We make all our own costumes mainly from second hand or repurposed materials. We draw inspiration from 60s and 70s and disco with a splash of intergalactic inspo and glitzy bits.”

As word of the Nice Biscuit phenomenon spread in Brisbane and beyond, they have been invited to support acts such as The Growlers, Allah-Las, Jen Cloher, The Murlocs and Gabriella Cohen, and have enchanted the stages of Gizzfest, Blurst of Times, and the Oxford Arts Factory 10th Birthday Party. In 2017 they won triple j Unearthed’s competition to showcase at BIGSOUND, later named as one of their Top 10 bands of the conference.

In every music fan, there’s a thirst to find the “next great thing”, the next band or artist to hold dear, to blast on repeat until sores form and the vinyl splinters. Nice Biscuit are that band, but they’re not next in line, they’re right here - the future generation of Australian psych-pop has arrived! 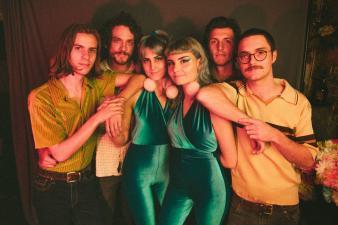 it's like we've launched into outer space in the nice biccie rocket and you've chucked it in neutral while we gaze out the window at all the magic around us.

it's like we've launched into outer space in the nice biccie rocket and you've chucked it in neutral while we gaze out the window at all the magic around us.

It's this dreamy rollercoaster to outta space and I've just bought 5 tickets. This whole project is so unusual, creative and clever. Chuck this on in the background and time will zoom right past you.

It's this dreamy rollercoaster to outta space and I've just bought 5 tickets. This whole project is so unusual, creative and clever. Chuck this on in the background and time will zoom right past you.