Northeast Party House knows this well, as do many of the characters inhabiting their hotly anticipated debut album, Any Given Weekend, out May 16 through Stop Start.

Since forming in Melbourne Australia in 2010 (and being ‘Unearthed’ by triple j that same year for their song 'Dusk'), Northeast Party House have built a cult following thanks to their electrifying live shows, and songs combining the heady exhilaration of dance music with pop hooks and rock backbone. These five young guys – most still in their early 20s – have brought the party to stages ranging from the Falls and St Kilda festivals to national support slots for acts such as Jungle Giants, Midnight Juggernauts and Ball Park Music.

“Everything has always revolved around our live show. Playing live has always been a very different experience to listening to our (recorded) music. And that’s always been the confusion with us.” says Sean Kenihan

Not anymore. With Any Given Weekend, Northeast Party House have finally bottled their live genie into an album of 10 cohesive tracks that are destined to ignite parties all around the nation, in one of the most accomplished debut albums you’ll hear in 2014.

Any Given Weekend is Northeast Party House’s ode to partying – the good, the bad and the ugly – and the band members’ gloriously shambolic ride into adulthood. Party guests on Any Given Weekend include love, lust, friendship, bright lights, sticky walls and the odd stimulant, along with songwriting chops aplenty.

Album opener ‘The Haunted’ – released as a single on March 14 and already enjoying high rotation on triple j – creeps up with mesmeric, sparse beats, bass and keys, and smooth vocals from Hamilton-Reeves before a sonic ambush of searing wall–of-sound keys thumps you into next week.

Produced by band members Sean Kenihan and Malcolm Besley, (Besley who's clocked up production experience with the likes of Snakadaktal & The Holidays) the pair recorded most of the songs in their own home studios.
.
With Any Given Weekend, Northeast Party House have brought the party home. And it’s one you don’t want to miss.

In 2010 'Northeast Party House' will bring the energy of a riotous house party to every club, festival, kindergarten and warehouse party they play.

TELL US ABOUT YOUR MUSIC - HOW DID YOU DEVELOP YOUR SOUND?

Well it is still very much in the developing phase. Basically at school we all grew up playing funk & reggae, but once we started getting older and going to parties and festivals we discovered we were listening to dance music more and more. Our aim is to write party tunes without sounding too electronic and keeping a very strong live band energy.

WHAT CAN THE AUDIENCE EXPECT AT A LIVE SHOW?

TELL US MORE ABOUT THIS 2 WEEK HOUSE PARTY?

We were in the middle of year 12 exams when our good friend Sam Northeast stole the microphone from a DJ booth at a club and announced "Everyone back to my house, mum's overseas!". From there it just kind of escalated. There were goldfish living in the bath, wood fires in the fake gas fire place and regular games of china-plate-frisbee. Among the items found lying around the house were garbage bags full of old KFC, power tools, and Nobby from Big Brother. Sam's two younger sisters were paid off to get the house back into a livable condition, but the damage had well and truly been done.

WHAT'S COMING UP IN THE FUTURE?

We are currently recording, so new tracks and a debut release are on the cards in the coming months. Apart from that it's gigs gigs gigs! 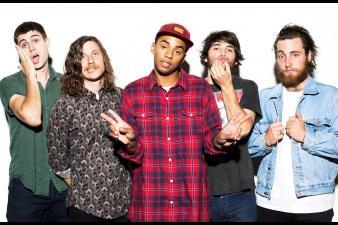 In 2010 Northeast Party House brought the energy of a riotous house party to every club, kindergarten and warehouse party they played.
More