Following the release of their Triple J Unearthed hit ‘Golden Eyes’ coming in at #5 on the overall charts and #2 on the indie charts, comes an equally bodacious and eccentric new single from singer/songwriter/producer Oh Forest Shore. Oh Forest Shore is the stage name of far north Queensland bread producer Mason Rowley, who draws huge The 1975esque vibes into his music, writing songs about love, lust and life growing up as a young adult in an era of such uncertainty.

Mason Rowley (Oh Forest Shore) is a physiotherapist by trade and balances his time delicately between helping people regain function during the day and pursuing his passion of music and the arts in any other spare moment of the day. Writing and producing music has always been a passion of Mason’s and is completely self taught, to the point where Oh Forest Shore music is completely written, produced and mixed entirely in the bedroom.

So Much for Happiness is the fourth coming single from Oh Forest Shore and is set to be, if anything, more exciting and flamboyant than any previous release yet.
The song explores Mason’s meditations into what it means to be living in a time where humans are arguably the most connected they have ever been, while simultaneously being completely disconnected from one another. With the advent of ever expanding technological advances and our young people feeling ever more detached from their surroundings, how could one ever really know what’s real and what’s fake. It’s a song about finding one’s own self worth in a time where free will is now a myth, and hopefully, finding some self worth in someone who truly makes you happy.

The music itself is a euphoric and eclectic indie pop arrangement, utilising heavily syncopated drum beats, dazzling synths, and well augmented guitar licks to provide a solid back beat that sometimes feels uneasy but always resolves with a strong purpose.

So kick back, settle in and let Oh Forest Shore take you on a smooth, indie pop journey through their latest release “So Much for Happiness”. 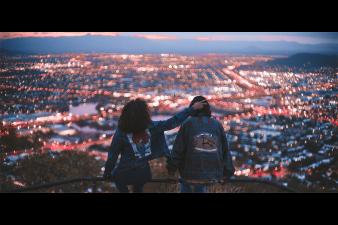 Stranger and the Light