After some time away to breath and grow, Philly is BACK - better than ever! He is working with Briggs’ all Indigenous record label – Bad Apples Music. The young MC is determined to continue to use his voice to make change and inspire young people.

“Hey I feel like I woke up in a dream, – I’ve seen a real life and it aint what it seems, don’t wake me up now please let a brother sleep. Here’s where I wanna be so you know I gotta keep moving that’s the only option here, I came from the bottom, what I got to fear, I came from the bottom now I’m finally here”

NOMINATED – 2015 THE AGE MUSIC VICTORIA INDIGENOUS ARTIST OF THE YEAR

PHILLY, 25, was born in the golden era of hip-hop in 1991. By the age of four his older brothers had a huge collection and all he ever listened to was hip-hop. The first song he could remember was Naughty by Nature’s ‘Hip Hop Hooray’ – Philly’s destiny was set. He began writing rhymes, dubbing beats & rapping in public and soon became a hip-hop sensation with a big following of kids in his hometown Mildura; his traditional homeland down Swan Hill side near the banks of the mighty Murray River.

“I feel like I’m obligated to use my music to make change for the better and to use my craft to teach. Through music I have always wanted to voice my opinion; whether it be about Aboriginal issues or to bring positive messages for Aboriginal youth, I understand that I have been given an opportunity to inform.”

He won triple j’s Unearthed NIMA Competition in 2014 earning him a performance slot alongside Briggs & The Last Kinection. “I feel like I’m dreaming,” he said on the night. The following week his debut single We On shot to No.5 on iTunes Hip Hop charts.

He was the winner of the National Indigenous Music Awards ‘New Talent of the Year’ category the following year, he performed a breathtaking rendition of Bob Marley’s Three Little Bird for triple j’s Like a Version, and he released his first E.P – Dreamchaser.

From the moment the words of Naughty By Nature hit Philly's ears, one thing in his life was certain, hip hop was the only way of life for him. Check out our interview with triple j unearthed's NIMA winner Philly from Mildura.

I grew up listening to hip-hop artists such as Naughty By Nature and DJ Jazzy Jeff & The Fresh Prince which is why I love making upbeat, motivational, feel good and uplifting type music, I also grew up listening to a lot of country music which is a reason why I like telling stories through music and Tupac has been a huge influence on me coming up and because of that I'm also on a conscious tip, I guess with all of these elements I'm still trying to find a balance so I'm still developing as an artist but I'm finding my sound more and more each day and I will perfect my craft in the near future.

The greatest source of inspiration as of late has been my people and my family, when I first started making music it was just for fun but now that I've become more conscious of what my people (the Indigenous Australians) have been through and what we are still going through today it really inspires me to help any way i can and music is the best way I know how.

What can punters expect from a Philly live show?

Honestly I don't plan my set, I don't plan transitions and sometimes change the order of my tracks during my set so it's a surprise for everyone myself included but one thing I can guarantee is that you can expect a lot of energy and crowd interaction.

The best advice I can remember receiving was "just have fun" I can't remember who it was from because I've been given so much advice from so many people since i started but it really stuck with me.

A track that comes to mind straight away is Treaty by the legendary Yothu-Yindi, it has a deep message behind it but you can't help but to dance to it and I'm a bit of a clown so whoever it is that's upset will definitely get a full performance of me getting my boogy on while singing along to it.

An Australian track that I can think of to bring them emotions out would have to be Took The Children Away by Archie Roach, the combination of Uncle Archies voice and the message he brings with it is very heavy and you can tell from the emotion in his words that its coming from his heart, this song will definitely touch everyone.

I actually haven't been to much gigs in Melbourne that I haven't been a part of and I've had a ridiculous amount of gigs so far this year and everyone of them were fun I definitely have to catch a gig soon though sometimes it's good just being in the audience and I'm hoping that will be my homie L-Fresh because I haven't caught any of his gigs yet but I've been meaning to.

Tell us about the bands or people in the Mildura music community that inspire you.

Mildura has a pretty cool scene when it comes to music I've been to a couple gigs there that are mostly heavy metal which I'm not the biggest fan of but I have a lot of friends that ask me to come along and support them, our hip-hop scene is small but is growing slowly which is great. WZRDKID are dope as you might know and I have a couple other friends that are crazy talented when it comes to rap they call themselves Dismal & Grim1 they haven't released anything yet but I promise I'll push them to get something out.

Release an album and go on tour they're my top priority as an artist right now, I have a long way to go so this year I want to build my fan base then take it even further next year. 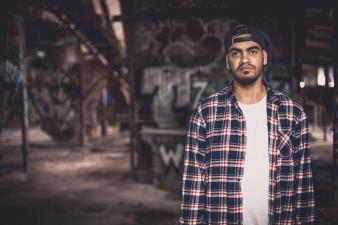 Phillip Murray aka Philly, is a 22 year old rapper from Mildura who's influenced by hip hop's 'Golden Era' and in particular the likes of Naughty by Nature.
More

Very stoked for some new music from the one and only Philly! Like how he keeps it so mellow throughout the track. It's a good bed for him to sing the praises for some deadly females.

Very stoked for some new music from the one and only Philly! Like how he keeps it so mellow throughout the track. It's a good bed for him to sing the praises for some deadly females.

We On featuring Steven Motlop