Bunch of fiery bad-boys from Revesby

We sort of just feed off each other and try and find a balance between not taking it too seriously and making some good music. If we think it sounds good, fun to play and exciting, we’ll keep playing it. Being constantly around music and gigs, it all feeds back into itself.

Inspiration often comes out of the blue, but usually some kind of experience or observation. Something that nags you for a while until you just have to get it out.

What can punters expect from a Pist Idiots live show?

'Boys Light Up' or some Kylie Minogue.

Amyl and the Sniffers at The Lansdowne, These New South Wales were our support acts. An electric evening, pure energy with some of the finest Australian rock music going.

Bands like Royal Headache and Palms are pretty inspiring to us. In our formative years, Palms had a residency at the Lansdowne and as a bunch 18-year-olds, those strings of shows would’ve been our introduction into Sydney rock music. Since the Lansdowne has re-opened I feel that there has been a bit of rejuvenation in support for local music. I can only really comment from around 2013, but I feel it’s improved.

I think that the Sydney community extends into the North and Southern regions of Sydney. Bands like The Pinheads and a venue like Rad Bar in the gong, were some of the first people to give us the time of day. For that, we luvem! 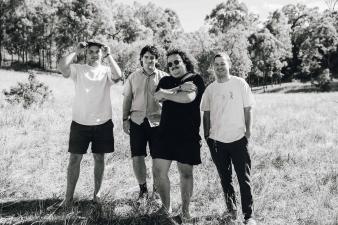 Pist Idiots showing a more melodic, softer side on this one. Still packs a punch tho!

Pist Idiots showing a more melodic, softer side on this one. Still packs a punch tho!

They've done it again!!!! Pisties just know how to write a killer tuneeeee.

They've done it again!!!! Pisties just know how to write a killer tuneeeee.