Based in the Australian beachside paradise of Byron Bay, PLTS (pronounced 'Pilots') are the archetype for independent music: they appeal to practically everyone, and answer to absolutely no one. Instead, PLTS find strength in honesty and the diversity it inspires in their music. Each stage of their development has brought further exploration and discovery – from dancefloor indie beats, to punk rock guitar tones, to the alluring vocal timbre of soul – all within the band's innate knack for writing larger-than-life songs.

Byron Bay four-piece PLTS are the local winners of our Splendour In The Grass competition. They'll be taking their anthemic indie rock sounds to the Ampitheatre stage of Splendour at midday on Saturday, July 23.

Read Interview
Tell us about your music. How did develop your sound?
PLTS was born from a simple vision; to create feel good music that engages with people. There were no real limits to the sounds we started out creating back in 2012, but given our broad range of influences spanning from folk to soul to punk-hardcore, a natural indie-rock sound started to emerge. Through years of jamming, demoing tracks and playing live, we’ve managed to build on this and craft our own sound. We’ll continue to develop and craft it even further along the way.
What’s your greatest source of inspiration for making music?
First and foremost, a passion for music itself. Whether its watching a ripping live gig, discovering a new band on the internet or finding comfort in a new genre outside your go-to playlists, that basic love for music helps to explore and create new sounds. Secondly, our natural surroundings. We’re lucky enough to call Byron Bay our home. Such an incredible place to live, showcasing some of the best coastlines to creative thinkers the country has to offer.
What can punters expect from a PLTS live show?
I guess as a rock band, there’s a certain threshold of noise you have to hit to unlock the right energy. We go hard on stage when required, but our strengths are equally showcased in our slower, more emotive songs. Expect to see all these dynamics, boiling into a solid 45 minutes of good vibes. We also just really enjoy performing as a group, so I hope that shines through!
What’s the best advice you’ve been given and who was it from?
Can’t speak for the whole band here, but as a 9 year old kid playing in my first band on an actual stage with a real PA, we were lucky enough to win a competition judged by John Butler, who at the time was a musical guru in my eyes. He approached me at the end of the show and simply told me to “keep enjoying what you’re doing”.
Seems kind of corny now I think of it, but it definitely stuck and it stands at the basis of what we do.
What Australian track would you play to cheer up someone who was crying?
Paul Dempsey – Out The Airlock
What Australian track would you play to someone to make them cry?
Redgum - I Was Only 19
You’re the DJ at a party. The dance floor is pumping. What Australian track do you put on next?
Round The Twist theme song, then repeat it once it finishes.
What was the last local gig you went to? How was it?
Went and checked our mates PRO VITA at the Northern in Byron Bay.
They’re legends from the Sunshine Coast and always put on a ripping show; they’ve just released a new single as well.
Tell us about the bands or people in your music community that inspire you.
Byron Bay has a really thriving, tight knit music community. The diversity is immense in terms of genres. You’ve got bands like ‘Tora’ who are owning what they do and pushing their sound on another level, newcomers like ‘Israeli Chicks’ and ‘Havens’, and hardcore heavyweights; Parkway Drive and In Hearts Wake who are killing it on a global scale. The fact that all these bands exist and put so much time and energy into doing what they do, inspires us to represent and be part of our local music scene.
What are your plans for the rest of 2016?
Can’t reveal too many goodies at this point in time, but I can say we’ll have new music to follow up from ‘On and On’ closer than expected, as well as a few more really exciting things to announce down the track. We’ll be writing a shit load of new material and just really keeping the momentum up towards summer and into the New Year. Plenty of gigs and new bands to meet, pedals to buy and just good vibes overall!
View Profile Hide Interview 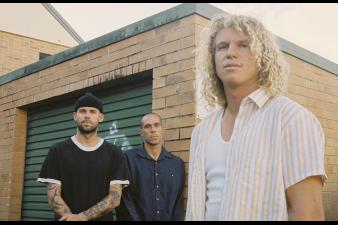 big slice of stadium rock from the nice men

big slice of stadium rock from the nice men

I have unhappy seconds when I heard some 30 Seconds to Mars creeping through followed by more positive Violent Soho references that make me feel ok again. Once you hear this chorus, you'll have a hard time extricating it from your dome over the next month.

I have unhappy seconds when I heard some 30 Seconds to Mars creeping through followed by more positive Violent Soho references that make me feel ok again. Once you hear this chorus, you'll have a hard time extricating it from your dome over the next month.

I DIG THIS HARD. Man I swear anything Jean-Paul touches turns to gold. Ugh, love how that chorus just explodes!

I DIG THIS HARD. Man I swear anything Jean-Paul touches turns to gold. Ugh, love how that chorus just explodes!