They’re from a shitty coastal suburbia you’ve probably heard of, but know only that your grandparents would happily flush your inheritance down the toilet to die there.

The latter half of 2016 sees the release of Pop Cult's new single 'Sunday Mourning' and self-produced debut EP via We Are Golden. "The writing/production process is all very fast and impulsive. Somewhere between bedroom-demos and studio recordings, we're writing as I'm producing and tracking as I'm mixing- a bunch of the final vocal and guitar tracks are from the original writing sessions. We want to write music that's immediate and accessible, so the process has to have as few obstacles in the way as possible," Heinrich describes the recording of Pop Cult's EP ‘Cult Classics’.

Cementing Pop Cult's rise through 2016 they’ve been shortlisted for Triple J’s Hottest 100 and 4ZZZ’s Hot 100, with Pop Cult's self-produced video for ‘Sunday Mourning’ being selected as feature clip on RAGE.

"Just as Primal Scream did in the early '90s, they're feeding off the same Rolling Stones' vibes with that rhythm and chorus. Still a winning formula for me." Richard Kingsmill, Triple J

The optimistic edges of Wonderwall meets Who-era harmonies on the latest single from Brisbane indie outfit Pop Cult...built around the flexibly hedonistic tagline: "do what feels wrong, until it feels right", that's undoubtedly destined to find itself firmly lodged in the humming mainframe of your brain for weeks. - Rolling Stone

Sunshine Coast 4-piece Pop Cult are the winners of our Big Pineapple Music Festival competition and will be taking their stomping feel-good rock'n'roll to the festival stage this Saturday, May 28.

Read Interview
Tell us about your music. How did you develop your sound?
The name hints at our influences; a bunch of classic pop writers (ELO, Fleetwood Mac, T-rex, David Byrne) in combination with great, yet under-recognised 'cult' acts (The Velvet Underground, Big Star, The West Coast Experimental Pop Art Band, Teenage Fanclub, Television) with some assorted Madchester and Britpop for good measure.
What’s your greatest source of inspiration for making music?
Father John Misty's various social media accounts provide unending amounts of inspiration in reminding us to develop a unique and personal voice in order to cut through the noise. He's the musical equivalent of Donald Trump - controversial, completely exaggerated and ridiculous but part of you always wonders whether it's genuine or contrived. Either way, having something to say is the point.
You’re the winner of our Big Pineapple competition. What can punters at Big Pineapple expect from the Pop Cult live show?
Plentiful 'Kool-aid', sing-a-long choruses and we're working on a special cover- think 90's one hit wonders, speed-dealer sunnies and 'Karen, I love you!'.
What’s the best advice you’ve been given and who was it from?
My girlfriend once said, 'Don't give up your day job'.
What Australian track would you play to cheer up someone who was crying?
Shannon Noll - What About Me
What Australian track would you play to someone to make them cry?
Khe Sanh over-and-over-and-over-and-over-and-over-and-over-and-over.
You’re the DJ at a party. The dance floor is pumping. What Australian track do you put on next?
Paul Kelly - Before Too Long
What was the last local gig you went to? How was it?
We're about to head out to see Client Liaison at our local - Sol Bar. We'll keep you posted on how the night unfolds, but we're big fans...
(later that night)
...This just in: choreography for days, Michael Jackson cover, who knew Tom Tilley could slap a bass?
Tell us about the bands or people in the Sunshine Coast music community that inspire you.
There are a number of super-talented emerging artists from the Sunshine Coast (Ayla, Battleships, Tempesst, Sahara Beck, Pilgrims etc.), but there are a bunch of unsung heroes (Brian, Dimmi and Alex at Sol Bar, Mark Pico, James Birrel) who've completely reinvigorated the coast into a hub for original live music, they've all given us a serious leg up.
What are your plans for 2016?
We're releasing another single shortly, an EP in the next couple of months and a tour with Unearthed alumni Stonefield!
View Profile Hide Interview 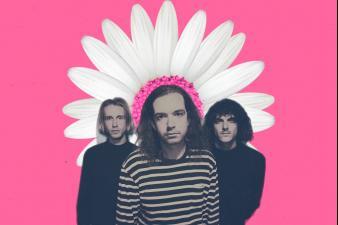 Pop Cult are playing the Piney!

Woah, take me back to the 90's when The Verve were absolutely killin' it. Loving the psych vibes and catchy lyrics from these guys! Very cool.

Woah, take me back to the 90's when The Verve were absolutely killin' it. Loving the psych vibes and catchy lyrics from these guys! Very cool.

This is so sunshiney and delightful and yes, a bit Corgan and a bit The La's but also a whole lotta YOU. Nice one.

This is so sunshiney and delightful and yes, a bit Corgan and a bit The La's but also a whole lotta YOU. Nice one.

I've always liked this band a lot, but I'm fully sucked in by this one. Heard it on Kingsmill's show on Sunday as I was pulling into my street, and had to sit in the car til it finished.

I've always liked this band a lot, but I'm fully sucked in by this one. Heard it on Kingsmill's show on Sunday as I was pulling into my street, and had to sit in the car til it finished.