2015 began for Pro Vita with a string of single releases in the lead up to the bands third EP entitled ‘Scattered’. The third single Julia released in May saw the band’s first taste of national radio play on Australian broadcaster Triple J.

Through Triple J’s Unearthed program the group were pleased to receive the festival slot to be the Sunshine Coast’s first official Unearthed band. This milestone had the boys play the 3rd annual Big Pineapple Music Festival to open the main stage for the likes of The Jezabels, Violent Soho and The John Butler Trio.

Front-man and prolific song-writer Connor Brooker continues to receive acclaim for his other projects including Brisbane based trio Bugs and electro solo project White Wash.

Pro Vita have had a blast playing festivals such as Brisbane’s Bigsound in 2014 as well as continuing to share stages with national and international legends such as Sticky Fingers, Dune Rats and Glass Towers to name a few.

2016 marked the bands strongest year to date with new releases and supports with the likes of DZ Deathrays along with touring with mates Lunatics on Pogosticks. 2017 started with a bang for the fellas supporting pop punk legends Moose Blood (UK) and being announced as one of Triple J Unearthed’s top 50 played Artists of the Year.

2017 has had Pro Vita tour nationally with their first leg to Western Australia in the release of their latest single Love You For It, available everywhere online now.

Sunny Coast legends Pro Vita are the winners of our Big Pineapple Music Festival competition. They'll be opening the fest this Saturday May 30, before the likes of Violent Soho, Thundamentals and John Butler Trio.

Read Interview
Tell us about your music. How did you develop your sound?
Our music is all about having fun. We developed our sound by morphing together all of our musical backgrounds into something we were all pretty happy with.
What’s your greatest source of inspiration for making music?
Love, waves, mates and Australian music.
You’re the winners of our Big Pineapple competition. What can punters at The Big Pineapple Music Festival expect from your live show?
Fun tunes, bad dancing, funny singing faces and us running around on the huge stage.
What’s the best advice you’ve been given and who was it from?
Jeremy Neale's daily life advice Facebook status'.
What Australian track would you play to cheer up someone who was crying?
Fuck It by Dune Rats
What Australian track would you play to someone to make them cry?
What About Me by Shannon Noll
You’re the DJ at a party. The dance floor is pumping. What Australian track do you put on next?
In a perfect world we would play a Sandstorm cover by Violent Soho. In a perfect world.
What was the last local gig you went to? How was it?
We went to see Smith Street Band at the SOLBAR on the Sunshine Coast and they were nuts. It was a Wednesday night and the room was absolutely packed.
Tell us about the bands or people in the QLD music community that inspire you.
The Brisbane music scene is full of epic musicians and rad mates who are continuously releasing crazy good music. The Sunshine Coast is starting to catch on which is awesome.
What are your plans for the rest of 2015?
New music, a bunch of shows and having a rad time doing it.
View Profile Hide Interview 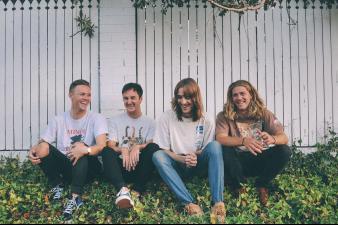 The Sunny Coast legends will open up the Big Pineapple festival for Unearthed in 2015.
More

I WASN'T AT THE MEETING BUT THIS IS INFECTIOUSLY GOOD

I WASN'T AT THE MEETING BUT THIS IS INFECTIOUSLY GOOD

came on in the music meeting and before i could say anything quinny told me to shhhhhh but under my breath i said 'i like this song lots'.

came on in the music meeting and before i could say anything quinny told me to shhhhhh but under my breath i said 'i like this song lots'.

came on in the music meeting and I was like "excuse me i think my soul mate connor is playing a song for me, everyone stop talking"

came on in the music meeting and I was like "excuse me i think my soul mate connor is playing a song for me, everyone stop talking"