“Are You Coming Home?' was written on the family piano and is about my parent’s relationship and how I felt as a kid when they separated. Now that I think about it, my mums catch phrase was “are you coming home?” explains Dylan.

Rainy Day Women will be performing at WAM’s State of the Art music festival on May 30th. They are also finalising dates in the US where they have developed a growing fan base since the release of their debut album ‘Aint it time’.
‘Are You Coming Home?’ is taken from Rainy Day Women’s forthcoming mini album ‘In The Right Place’

Rainy Day Women are an exciting Perth 4-piece that produce some infectious sunny day pop. Get the first taste of their upcoming EP 'Friends' here on Unearthed.

We’re really into classic pop songs with a great melody - mostly stuff from the 50’s-70’s. Like Fleetwood Mac, The Beach Boys, The Beatles etc, all the classics. So I guess our sound is borrowed from all of those bands that we like but our focus is just to write good songs that stand strong melodically. Lots of harmonies, lots of hooks, lots of space for things to move.

Our songs are pretty short and to the point on record, so we like to extend things out a bit live and get a groove happening. We just want to get good vibes across and do our best to make sure the audience is enjoying themselves. Not taking ourselves too seriously, I guess. We don’t wear shoes on stage.

The producer for both of our EP’s so far, Andy Lawson (Debaser Studio) , has been quite a mentor. He’s really invested in what we’re doing and has taken the time to help us grow as songwriters (forgive the cliché). We love Perth exports like Tame Impala and bands that are doing their own thing. Place of Indigo are a local band that are going at a sound that isn’t the usual.

I’ve heard a lot of people say this, but I think it was Sam from the Rubens that stuck it in my head. It was, that you should never write music with the main objective of it being widely liked. That’s not to say to stay away from writing pop songs, but just to be honest with song writing. It’s really easy to slip in and out of trends but people can tell when you’re being honest. Phases come and go, I'd rather be playing music that I was passionate about to an empty room than playing music that I didn’t like to thousands of people. A wise man once told me to eat the chips first because you can always save the burger for later, but the chips go soggy in the fridge.

We’ve just released a new single called ‘Runaway’ which is off our upcoming EP and are in the middle of a very busy month of shows promoting it. In between that we are writing for an album. Our new EP ‘Friends’ will be out in February and we’re so damn excited to share it!

...exciting! You can trawl Unearthed for hours listening to different music that is generally of a pretty high standard. All of the Aussie bands that we have played with have all been such good people and that makes the whole thing so much more fun. There’s a community and a party wherever you go. 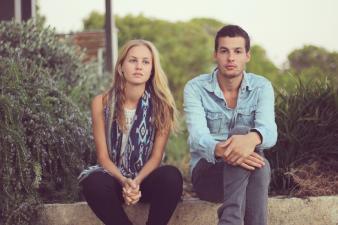