Windwaker, Stand Atlantic, The Dead Love, Yours Truly, Down For Tomorrow, FANGZ

Sydney heavy mutants RedHook officially spawned in 2018 with the arrival of their debut singles ‘Minute On Fire’ and ‘Turn Up The Stereotype’, which clocked up over 2 million streams across YouTube (largely through fan-generated content) and garnered rave media reviews, including two 5 star triple j Unearthed reviews from ‘Good Nights’ presenter Bridget Hustwaite and ‘Short.fast.loud’ host Josh Merriel. The strength of these first two releases was also enough to attract the attention of the promoter of one of the biggest rock & metal festivals on earth, Sean Ryman of Download UK, who swiftly booked RedHook to play the 2019 instalment of the festival.

Featuring the core songwriting duo of Emmy Mack and Craig Wilkinson, two strangers from opposite ends of regional NSW whose paths collided after moving to Sydney in 2017 and bonding over the role that music has played in both of their lives, RedHook combine with the young gun drummer Alex Powys to create experimental, heartfelt and attitude-filled alternative music that fuses multiple genres including rock, rap, metalcore and electronica, with lyrics that aim to inspire listeners to keep fighting against the forces of darkness - both in the real world and inside their own heads.

2019 saw the trio release three more singles - ‘Paralysed', ‘Only Bones’ and most recently 'Fake' - all of which have been added to full rotation on triple J and exploded on Spotify with over one million combined streams and multiple editorial playlist adds (New Music Friday, New Core, Heavy Queens, Rock Out & more). These releases also propelled RedHook to be named triple j Unearthed Feature Artist, as well as the UK's Kerrang! Radio Feature Artist, and go on to win the triple J Unearthed competition to open Download Festival's inaugural Sydney event in March.

The RedHook whirlwind continued across 2019, seeing the band sign on with the Hen House Management (worldwide) and ink booking deals with New World Artists (AUS) and Paradigm (UK/EU), while in the live arena they played the debut instalments of Sydney’s two brand new rock festivals (Good Things and Download), completed their debut international tour (supporting metal titans Three Days Grace across the UK & Europe), made their Download UK festival debut, launched their own gender diversity-inspired alternative festival in Sydney - 'UsFest', showcased at BIGSOUND 2019 and undertook four full Australian tours (supporting the likes of Hands Like Houses, The Faim and US rock legends Sevendust before selling out the Melbourne and Sydney legs of their own debut headline tour in September).

RedHook were the ninth most-played artist on Triple J Unearthed in 2019, and 2020 was shaping up to be huge for the band prior to the global pandemic, kicking off with a bucket list gig hosting ABC’s esteemed music video program 'rage' and a tour supporting The Amity Affliction.

RedHook have spent their pandemic downtime recording stacks of new music, with the announcement of their debut longer-form release coming very soon.

It was a long time in the incubator! Believe it or not, when RedHook first started out we were playing this weird 70's blues rock / 80's metal hybrid - you should hear our early demos! But the sound slowly evolved through lots of experimentation in the studio, not to mention the addition of Craig on guitars and programming. We just kept pushing and challenging ourselves as songwriters to create a sound that was unique to us before we shared any of it with the world. We never really wanted to fit neatly into a box.

Honestly Craig and I tend to be most inspired to write when we're feeling negative emotions really intensely. Grief, anxiety, depression, anger...it sounds bad, but it's actually kind of a productive way to deal with those unpleasant feelings. It helps us process them in a positive way and move forward. We joke that it's like exorcising our demons! And I guess our biggest hope is that listening to it will help other people deal with theirs.

What can punters expect from a RedHook live show?

Punk jumps, spin kicks, hair flips and furious eye contact. The energy is pretty chaotic onstage, sometimes I fall over and one time our bassist busted his knee.

If people are dicks to you, don't be dicks back. They're the ones who'll end up looking like dicks. Our manager Rob actually said that to us pretty recently and it's worked out well so far! Also, just don't be dicks at all. Stay humble, appreciate what you have and support the people who support you. Being in a touring band is ROUGH AS so if people are nice enough to help you out by lending you gear or giving you a couch to crash on, always return the favour and pay it forward (shoutout to the legends in Days Of Deceit and Void Of Vision. We owe you guys big time!)

Probably 'Smoko' by The Chats, it's hard to hear that song and not crack a few solid lols!

Oh god! 'Dinosaurs' by Ruby Fields gets me in the feels SO HARD every. single. time. Jurassic Park is my favourite movie ever and I bawled so hard the first time I heard that song!!!

'Shooting Stars' by Bag Raiders. Really, is there any other choice?

We've been on tour pretty much non-stop since UNIFY (which was epic, as always!) but we did manage to hit Crowbar in Sydney to see Awaken I Am, Isotopes, Watchtowers & Kaskeid supporting Secrets from the US. It was an absolute vibe! Lots of singalongs and a wild pit!

There are so many incredible acts exploding out of Sydney right now, but we can't help but be inspired by those closest to us. Bands like Stand Atlantic, Yours Truly and Down For Tomorrow are all kicking major goals in their own respective lanes and it's so heartening to see such talented, lovely people succeeding. I've also got to shout out our incredible producer and dear mate Stevie Knight who fronts a sick band you may have heard of called The Dead Love. Without his guidance, faith & numerous pep talks when things were at their shittest, RedHook would never have made it this far. He's been our rock n' roll Yoda, inspiring us not to give up and helping shape the band into what it is today. His producer hands are also all over so much of the killer new music your hear coming out of your radio as well. Stupidly talented guy.

Oh geez, there's so much happening we get a bit dizzy thinking about it! First up is the inaugural Sydney leg of Download Fest happening this Saturday (thank you so much triple J Unearthed for the slot!) and then jetting off to play the UK version in June, which we're beyond pumped for (Slipknot & Tool OMGOMG)!! We've got a show with Void Of Vision down in Frankson on March 16th that's going to be an absolute baller. We'll be announcing a really exciting new festival event this week that I've personally created and curated, so stay tuned for that! We're also planning to unleash plenty more music including a bit of a timely cover that we're pretty proud of and a bigger release later in the year... and apart from that, basically just touring our absolute guts out! 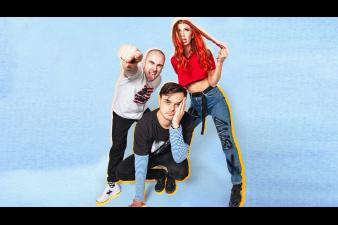 PLEASE GET THIS SONG OUT OF MY HEAD! IT'S BEEN IN THERE FOR OVER A WEEK NOW! I HAVE WORK TO DO! I HAVE OTHER SONGS TO LISTEN TO! OH GOD HELP ME!

PLEASE GET THIS SONG OUT OF MY HEAD! IT'S BEEN IN THERE FOR OVER A WEEK NOW! I HAVE WORK TO DO! I HAVE OTHER SONGS TO LISTEN TO! OH GOD HELP ME!

RedHook bringing in the gold. Kickin' off with the catchiest chorus and into an energised, off the hook delivery. It's just THAT good.

RedHook bringing in the gold. Kickin' off with the catchiest chorus and into an energised, off the hook delivery. It's just THAT good.

a dangerously catchy one here from redhook who deliver on the grunt and have a semi trailers worth of hooks to go with. try getting this one out of your head!

a dangerously catchy one here from redhook who deliver on the grunt and have a semi trailers worth of hooks to go with. try getting this one out of your head!