Reija Lee has cemented herself within the electronic music world as one half of the duo ‘Kito & Reija Lee’; as the queen of EDM features (having worked with the likes of Zeds Dead, Shockone, Paces, Metrik, and Fred V & Grafix); and has been sampled by rap heavyweights such as T.I., Outkast’s Big Boi and Trinidad James.

Previously signed to Diplo’s label Mad Decent, Kito & Reija Lee’s breakout hit ‘Sweet Talk’ hit No 1 on the US Dance iTunes and was used for the Victoria’s Secret 2013 Spring/Summer Campaign all over the US and Canada. Having released EPs on Mad Decent and Ultra Music, and having toured the US, Australia and NZ, Kito & Reija Lee laid the project to rest in 2015.

2017 saw Reija Lee’s resurgence into dance music with a Triple J playlisting and a national tour for the single ‘A Dark Machine’ with Shockone; the release of ‘Blood Brother’ - her collaboration with Canadian duo Zeds Dead and Diskord, and appearances on 360’s new album ‘Vintage Modern’, with the tracks ‘Drugs’ and ‘Body Language’.

Reija Lee’s solo project, due out in 2018, reveals her passion for 80s synth-pop. Taking inspiration from classics like Kate Bush and Tears for Fears, her solo work is a polished blend of nostalgia and freshness, topped off with soft, silky vocals and melodies that will stick in your head for days.

Perth artist Reija Lee is this week's triple j Unearthed Feature Artist. She blew us away with her sparkling, 80's synth pop inspired debut single, 'Love Nobody' and we can't wait to hear more.

Developing my sound wasn't a conscious effort. It honestly just blurted out of me. I had spent years making club music while having this soft spot in my heart for rock/pop bands and being inspired by artists like M83 and Bertie Blackman, part of me really just missed the live music world. So, when I started writing for this project (albeit still on a computer with software instruments), I was using a lot of real instrument sounds, looking for a more organic sound and everything always had a touch of 80s vibe to it - that's just what I love. When I decided I was making pop music I was like "I can use Linn drums! I can use cheesy sounding synths! Omg it’s pop music! I can do whatever I want!!!" So, there's been a real freedom in writing pop music for me.

This is always such a hard question for me because I feel like it changes all the time. Sometimes I'm just super inspired by really well written pop songs that are out at the moment. Like right now I can't get over Eilish Gilligan, and I'm constantly analysing G-Flip's 'Killing My Time' because it's got this weird structure, but literally every section of top line in the song is a killer hook... But sometimes I'll sit in my studio and just listen to Pink Floyd's 'The Wall' from start to finish, or John Hopkins' 'Singularity', or even my brother (ShockOne)'s first album 'Universus', because they are albums that are so all-encompassing that they take you on a journey and make you feel so intensely, and I love that.

What can punters expect from a Reija Lee live show?

Well, as I mentioned, I began this project with the thought of live instruments in my head. So, I'm currently in the process of building a band around these songs. There will be live instruments but also still an electronic element like sample triggering, etc. Also, I saw M83 live in London years ago, and at the end of Midnight City this guy came out of nowhere and played that insane sax solo and everyone just lost their s***. That will definitely happen in a Reija Lee show. Hahahaha…

My brother once told me to never have a Plan B. If you have a Plan B, you'll just end of settling for it. If you don't, your only option is to succeed in music. Scary advice, but it's served me well to this day.

Willow Beats - Special! (Fun fact - my brother named his daughter Willow and this is her song <3 cute!).

Nick Cave - Into My Arms. When I was a little kid I would often listen to this song when I wanted to cry. That, and Jeff Buckley. Sensitive little soul.

I actually performed at the State of The Art Festival with Shock One recently. It was on WA Day and showcased acts from all over WA. It was awesome to see so many people from Perth and surrounds getting together and really showing what an amazing music community we have here. I was a proud Perthian that day.

Stella Donnelly! I love her lyrics, her lovable persona, her sense of humour, her message, everything. WOMPP (Women of Music Production Perth) - I am a quiet follower of this organisation as I love watching female producers killing it, and they also do cool showcases and talks and workshops and I just think they are FANTASTIC. The whole DnB / Dance music community in Perth. It's one I've been involved in for a while so I can't help but mention how amazing I think it is. Drum n Bass is still really quite underground in Australia and it's hard times right now for dance music everywhere as a lot of our clubs have closed down... but the community still manages to fight on. Despite being the most isolated city in the world, we still have the biggest New Years Eve event in the country with Origin. It's easy to think that Perth is a sleepy old city where nothing happens, but there's still a lot going on here if you pay attention.

More music!!! I have a second single that’s almost finished that I'm super excited about, aaaand I have also just finished the video for Love Nobody which I CAN'T WAIT to share with everyone. Other than that, more writing for an album, and working on an amazing live show with a sax solo! 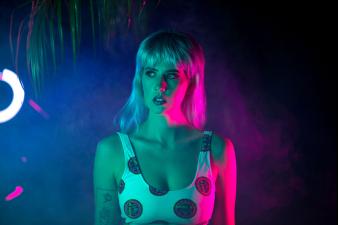 Big ups to our victors!

Something about this gives me a big virtual feeling. It's very colourful and pretty. Big neon lights everywhere too. It's a stunning vibe.

Something about this gives me a big virtual feeling. It's very colourful and pretty. Big neon lights everywhere too. It's a stunning vibe.

reija lee is operating in a zone only few can dream about. it's smart and cool and so so danceable.

reija lee is operating in a zone only few can dream about. it's smart and cool and so so danceable.

Love Nobody gets stronger on each listen, it's like you've bottled the emotions of a John Hughes film on this track

Love Nobody gets stronger on each listen, it's like you've bottled the emotions of a John Hughes film on this track