The adventures of Sherlock’s Daughter produce a sound where noise meets calm, mystery challenges imagination, and nothing is as it seems. Born from a late-night revelation on a stormy eastern Sydney shore, front woman Tanya Horo weaved the fatasy worlds of the sepia-tinged memories of Arthur Conan Doyle’s Sherlock Holmes, fleeting new-world colonial adventure & ornate pagan ceremonial impressions. Bridging the gap between insanity & parable, the 5 piece - comprised of Tim Maybury (guitar), William Russell (drums), Liam Flanagan (bass) and Jonti Danimals (live electronics & samplers) - knit together a heaving experience of heavy dream pop through shifting frames of multi-instrumentation... The music is replete with diverse elements such as live videogame tweaking, percussive sandpaper, echoing handclaps, marimba, sampled rhythmic scenes and sweet, uneasy harmonies. The debut self-titled 5 track EP has made blissful fractures with Australian radio, with the the tracks ‘Kids’, 'Sons And Daughters' being added to A-List rotation on Sydney’s FBi94.5fm and Triple J selecting the band as it’s ‘Unearthed Feature Artist’ in June, followed with spot rotation for 'Song For Old People' and 'Kids'. Support & tours this year with Metric (Can), School Of Seven Bells (US) and The Temper Trap have pegged Sherlock's Daughter at a rapturous live force. Sherlock’s Daughter are currently on tour in the US, including three shows as part of the prestigious CMJ Music Conference in New York City. They have also been selected as a Top 3 Finalist in the Qantas Spirit of Youth Awards 2009.

Sherlocks Daughter writes songs that vary from 80's pop, electronic sound-scapes to 1960's folk. Inspired by the consistency of being inconsistent, Sherlock's Daughter this makes for a band of eclectic values.

We all just started jamming together and our music is pretty much a little bit of each of us, intertwined - we are pretty lucky, as it just seems to work. I'm sure there will be sometimes where it won't... but like a family, we'll figure it all out together.

What can we expect from a Sherlock’s Daughter live show?

Every show is different and it depends on the audience, as they are just as much a part of the experience as us and if they aren't vibing, then it will rub on us and vice versa .... normally however we all get pretty excited before a show: Will - our drummer - can never sit still which is kinda amusing, considering he kinda has to on-stage.

Tell us about your influences.

We all have varying influences, I guess Moondog is a big one for all of us, Animal Collective, Fleet Foxes, Eno, Xenakis, Computers, Melodies .... quite a lot actually.

We are about to release our EP in August, then do a tour here and overseas, and return to work on our album, and then pretty much repeat ..... fun. 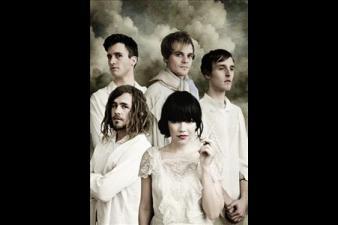 Congratulations to our 2010 Big Day Out winners!