...And You Will Know Us By The Trail Of Dead, Brand New, Biffy Clyro, Death Cab For Cutie, Cloud Nothings, Japandroids, Kate Bush, Silversun Pickups, Placebo

The diet coke of everything you love.

Adelaide 3-piece Sincerely, Grizzly are one of the winners of our Laneway Festival competiton. The trio will be bringing their "literature rock" sounds to the Courtyard stage of Laneway Adelaide at 5:10pm this Friday Feb 8th.

You’re one of the winners of our Laneway competition and will be opening the festival in Adelaide - what can Laneway punters expect from the Sincerely, Grizzly live show?

Tell us about the bands, producers and people in the Adelaide music community that inspire you?

How much time do you have? Adelaide had and has some incredible bands; Zeta (RIP), Lumonics (RIP), Bad Girls of The Bible (RIP), Fire! Santa Rosa, Fire!, Steering By Stars, The Honey Pies, Horror My Friend, Charlie Monsoon; producers Aidan Moyse (Hawks of Alba, Curses), Matt Hills (Wolf and Cub, Fire! Santa Rosa, Fire!) and people Spoz (Spoz's Rant), Luke Penman (Play/Pause/Play) and Colin (I'm not actually sure what he does but he's everywhere). The industry side of things meanwhile seems to me to be moving in a positive direction too; 5/4 Entertainment, Fourwords and Cats, Clarity Records, Pilot Records, Db Magazine, By Popular Demand, all contributing to that. Those bands, people and institutions inspire us because I think they all believe in the idea that if you create something truly good and work hard, you'll be rewarded for it.

It's not my earliest memory, but the first band I saw that really moved me were a local band called Zeta. Their songs were as amazing as their live show, which included (but was not limited to) their singer/guitarist Sascha playing in a white boxing robe, shirtless with crass things written on his body in texta, smashing guitars, but always with this remarkable inability to tune his guitar. That really resonated with me.

We'll be heading around Australia to play some shows in March and April with our west coast connect, Dead Owls. Then we'll be doing some more recording, hopefully another video or two and then hopefully releasing said music and video/s. And shows, more shows. And hopefully more festivals too. Basically anything and everything we can.

...killing it! Emperors, Dead Owls and Mezzanine from WA, Luca Brasi from Tassie, I, A Man from VIC, Ted Danson With Wolves from NSW, Tape/Off, Violent Soho and The Medics from QLD and the aforementioned from home. It's so good! 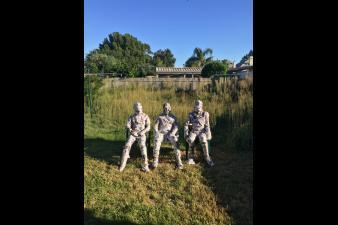