The Sleepyheads are a band from Tasmania, Australia.

It's time to eat your heart out with this week's Feature Artist out of Launceston, The Sleepyheads.

I (Pat), released 2 solo EPs in 2015 under my own name. Then the Sleepyheads formed a year or so later. The full band has definitely influenced the sound, my solo stuff was a lot more folky. I think it's still on the internet somewhere actually!

Relationships always come up a lot in my writing, which is super original hey? Not just romantic relationships though, but friendships and how certain things can effect those relationships. I've always found it way easier to write about stuff that has actually happened, rather than making up stories. I'll often take something someone says and then base a whole song around that.

What can punters expect from a Sleepyheads live show?

A lot of fun. We always just aim to have a really positive energy at live shows. We also used to drink out of gumboots, we might be bringing that back again soon too.

"All Together" by Househats is definitely my go to happy song at the moment!

Sunk by Kat Edwards will break your heart and mend it again all in the space of 4 minutes.

Find me one party where "Wild Strawberries" by Pnau hasn't taken it up a notch, and I'll be very surprised.

The last gig I went to was when we played with the Bennies a few weeks ago. It was great. You cant have a bad time at a Bennies gig! The next day was very rough though. Very rough.

Tell us about the bands or people in the Tasmania music community that inspire you.

I've always looked up to the Luca Brasi boys. There approach to supporting the Tassie scene is really encouraging for younger bands. Other awesome friends doing great things are The Saxons, Sumner, Hurricane Youth, Kat Edwards and Squid Fishing. It's always inspiring watching your friends do amazing things.

We want to tour a lot more. We haven't been to Adelaide yet so we really want to get up there, and maybe Perth as well? I reckon we'll try and write and record some new stuff too. 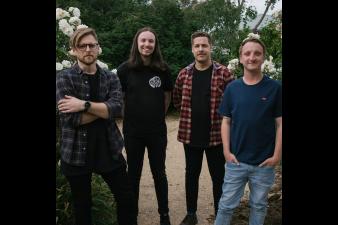 sleepys have a formula that every single time rips me open and i'm honestly not getting sick of stitching myself up every coupla months.

sleepys have a formula that every single time rips me open and i'm honestly not getting sick of stitching myself up every coupla months.

i originally said 1.5 listens in and you'd be singing along, but i might scale that back to 0.75 listens in. a really great, heartfelt punk anthem.

i originally said 1.5 listens in and you'd be singing along, but i might scale that back to 0.75 listens in. a really great, heartfelt punk anthem.