We are Slumberjack. We usually sleep but sometimes make music.

For a pair of producers that spend their spare time tweeting about their favourite Portuguese inspired fast food chains, and television dramas about good guys having to do bad things to pay their medical bills; when it comes to their music, it's very serious business. Check out the interview for our Unearthed feature artist this week, Perth's Slumberjack.

F: I would describe our music as sitting snugly in the middle of a spectrum with one end being pretty clubby, beats-oriented sounds and the other comprising of what you’d find if you searched for “beautiful, relaxing piano music” on Youtube.

M: To be frank, it took a while for us to discover our style.  When we started we were heavily influenced by so many great artists; it was hard to think for ourselves when all we wanted was to be just like them (lol).  I guess it’s like when you are in school and joining the cool kids is all that matters.  I think we’ve matured past that now and learned how to channel what we love into what we really feel.

F: Other music! We get really excited when we hear all the amazing and interesting music being created by the other musicians out there and that really drives us to get in the studio and make our own sounds.

What can punters expect from a Slumberjack live show?

We really enjoy doing DJ sets, which pays homage to where we started in the electronic music scene, but we also have huge respect for live bands. We’re fusing both the quick nature of DJing with the more organic approach of a live performance so Slumberjack’s live show is all about adaptability. We’ve set it up in such a way that we don’t have to stick to a set list which we feel can sometimes be too rigid.  Everything is interchangeable in the moment so we can judge the energy of the room and choose tracks accordingly. Morgan plays the MiniNova synth and sings into a talk-box and Fletch is all about wild flailing arm movements over on the drum machine.

F: I loved the video Emoh did for Ableton Live School and his advice which went along the lines of: whatever genre of music you’re making, use sounds and instruments which are the polar opposite of that genre. That’s why you’ll hear a lot of world music sounds and instruments coming through our beatsy and trap-esque tunes.

M:  Best advice for me was from Mr. Carmack. We had the privilege of hanging out with him whilst he was in Perth.  His tip = no rules.  That was a real game-changer for us. Fletch and I were all about numbers, logic and precise technicality in our production work, but after seeing the man in action, we learnt to forget what we thought we knew, and just go with the flow.

Pretty much anything with Dofflin in the name. It’s almost impossible not to be happy listening to those sparkly records.

Circo is a local gig right? A very impressive one too.  It was awesome to see acts like Sable, Basenji and Chiefs play out on the pretty impressive stages they had set up and getting the attention they truly deserve.

F: We’re surrounded by a wicked community in Perth with loads of acts doing their thang. DIE HIGH, a record label and collective which started around the same time that we did have been really supportive and have brought together a lot of the musicians in Perth - at times forcing us to collaborate on music by whipping us in the studio.

M: Lab Six for sure.  The fam there also started around the same the as us and it’s so inspiring to see them grow and give back to the community through classes, workshops and live streams.

What are your plans for Slumberjack in 2014?

Make more music and meet more awesome people. Hopefully it will be something that we can do for as long as we can; making a comfortable living off music is the dream! 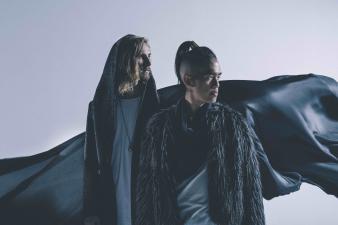 This is frenetically fun.

This is frenetically fun.

Enormous tune! Slumberjack and Sable together makes for some really on point, energetic dance music.

Enormous tune! Slumberjack and Sable together makes for some really on point, energetic dance music.