Small Talk are a five piece band from our Nation's Captial. In late 2018 the band released their first single ‘The Way It Hurts.’It’s release on Triple J unearthed won them the opportunity to open for the Rubens on the Canberra leg of their ‘Lo La Ru’ tour.

Since then, the band has gone on to release their debut EP ‘Blossom’ and have been gigging the local Canberra scene, finding themselves on the ANU’s Euphoria line up alongside the likes of Hockey Dad, Middle Kids, Sampa The Great, Touch Sensitive, Kira Peru and more. Small Talk are now excited to be writing a follow up EP and will be back in the studio soon! 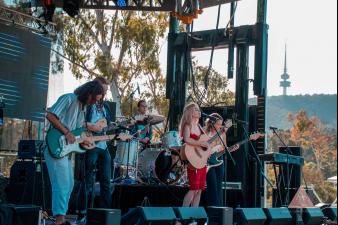 Shout out to our winners!

Damn, those keys go off!

Damn, those keys go off!

The Way It Hurts

This is well put together with Lauren's ear-catching vox standing out front and centre.

This is well put together with Lauren's ear-catching vox standing out front and centre.