CURRENT SINGLE // WHAT AM I DOING HERE?

Melbourne indie rock quartet Sons of Rico are back with a brand new single, ‘What Am I Doing Here?’. “It’s the question we ask ourselves in moments of discomfort, loneliness, or dissatisfaction, and the confidence it can take to address it.” - says Alex MacRae. The song is the first taste from the band’s forthcoming third album, and the follow up to 2013’s colourful ‘In Rico Glaciers’ that spawned singles ‘You Don’t Know What You’re Missin’ and ‘I’m Not Thinkin’ About You’.

The song is introduced in a manner that may have one thinking the band has travelled back to the 80s. What are they doing here? Electronic drum samples, swelling Toto-inspired synths, and Belle and Sebastian-esque vocal deliveries from frontman Alex MacRae and keyboardist Siobhan McGinnity seem to pave an entirely new direction for the band. However, we’re instantly snapped out of the calm when Adam Weston’s (Birds Of Tokyo) guest appearance on drums thunders in and the song confidently charges ahead, gaining momentum with every section -- keeping your ears on their toes.

Recorded in their new digs of Melbourne at Newmarket Studios, Sons of Rico were thrilled to have local hero Callum Barter (Dorsal Fins, British India) behind the desk engineering MacRae’s vision.

Sons of Rico launched out of Perth in 2010 with the single ‘This Madness’ from their debut album ‘Reactions’. In 2012, MacRae and Weston relocated to Brisbane to record the band’s sophomore album ‘In Rico Glaciers’ with legendary producer Magoo. Shortly thereafter MacRae relocated to band’s current home of Melbourne.

Sons of Rico from Perth infuse their smart pop sensibilities with elements of proud rock piggery and acrobatic vocal melodies.

Our music is quite varied but there seems to be a common ground across the scope. Every song has had its own process and history. Some came together in a matter of days - even hours, and some have been lying dormant for years. Deciding which songs to actually finish is always a big deal because so much attention to detail is required, so if a song idea doesn't feel right early on it's probably not worth pursuing. The great thing about how these songs come together is that they're all written and recorded straight onto the computer where they can be chopped, changed, previewed all at the click of a mouse!

Tell us what we should expect at a Sons of Rico live show.

Somehow an awful lot of tambourine made its way from the studio to the stage, but if you listen hard enough you'll also be able to hear plenty of guitar solos and sweet sweet harmonies. That's all a band needs to do live yeah? Punters can currently expect a set that peaks and troughs (much like our new album does) through moments of rock piggery for the guys and more sexual numbers for the girls…or vice versa of course.

What were you all doing before starting the band?

Every one of us have been kicking around in bands for some time now. In fact each of the fellas but me (Alex) are currently playing in other bands - such is the way in this melting pot of Perth!

The release of our first full length (titled "Reactions") is going to keep us busy for a while - there's talk of a trip or two over east early next year. We just want to get out and kick it hard for crew all over the shop! Oh and I guess we gotta think about album number 2 further down the track…

Thriving after over fifty years of genius thanks to Johnny O'Keefe, Billy Thorpe, AC/DC, Midnight Oil, Regurgitator, Silverchair and so many many more. We all listen to everything from rock to hip-hop to electronica, so it's refreshing and inspiring that we soak up new Australian music everyday. 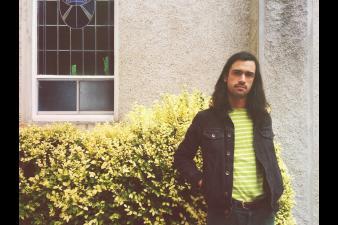 What Am I Doing Here?

I didn't expect a spritely pop number from Sons of Rico but I'm so bloody glad that's what you've given us.

I didn't expect a spritely pop number from Sons of Rico but I'm so bloody glad that's what you've given us.

There's a big splash of glam rock stomp to this and it's just what we need I think. A big, happy hit for summer.

There's a big splash of glam rock stomp to this and it's just what we need I think. A big, happy hit for summer.

Wow, this sounds HUGE. Really enjoying the layers of the track, and there's a Band of Horses-esque sensitivity to those vocals. There's a good drive behind this track.

Wow, this sounds HUGE. Really enjoying the layers of the track, and there's a Band of Horses-esque sensitivity to those vocals. There's a good drive behind this track.