Formed early in 2011, SPARKSPITTER have since been working to establish a sound of their own - blending influences from krautrock to contemporary art-pop, they seek to bridge the gulf between abstract, instrumentalism and contemporary pop ideals; landing somewhere in the sub-sub genre of math-pop art-rock. There's hints of the progressive utilities of bands like Tortoise, King Crimson and Battles; elements of the hypnotic repetition of minimalist forefathers Philip Glass and Steve Reich, but also a keen sense for crafting concise, effective melodies. The resulting amalgam manages purity and depth, and bristles with the energy of a heart full of joy.

SPARKSPITTER now have an impressive catalog behind them, having released their self titled EP in 2012, followed by the two track single FEARSPLISHING, and their debut album TECHNE and satellite EP DOXA in 2014 and 2015 respectively. SPARKSPITTER are heading into the studio to record their next release immediately after their upcoming trip to Brisbane for BIGSOUND in September 2016.

Wrap your ears around the groove-laden, math-infected, instrumental art-pop of Adelaide 3-piece Sparkspitter.

Tell us about your music. How did you develop your sound?
Tom and Rohan used to play in an improvised instrumental post-folk-rock band called Strega, and started Sparkspitter as an aside to work on when Lachy, the guitarist was out of town.  Rohan came up with the name, and we played vaguely mathy ambient music back then a la Clogs and The Necks.  After six or eight months, Matt (who was playing at the time with Bronze Chariot and Thunderclaw) joined the band and we started to experiment with the tighter, poppier structures and grooves that you hear in our current music.

In a basic sense, Rohan feeds a melodic/rhythmic idea in to a loop and the other instrumentation builds around it. We then take that idea on a bit of an excursion - superimposing whatever other melodic/rhythmic structures will fit it. The essence of what we do is that we're a novelty band :)

What’s your greatest source of inspiration for making music?
We get our inspiration from the nature of things mainly.  We're also pretty inspired by some of the art and music and coming out of Adelaide and the world in general right now.

What can punters expect from a Sparkspitter live show?
Well we actually just really love what we do and hope that translates. We'd rather not create expectation but just encourage all punters to come see for themselves.

What’s the best advice you’ve been given and who was it from?
'Live in your paradise' - Richard LeMessurier

What Australian track would you play to cheer up someone who was crying?
The Horses - Darryl Braithwaite

What Australian track would you play to someone to make them cry?
Everything is Fucked - Dirty Three

You’re the DJ at a party. The dance floor is pumping. What Australian track do you put on next?
! (The Song Formally Known As) - Regurgitator

What was the last local gig you went to? How was it?
Wireheads played at Title to launch their LP "The Late Great Wireheads".  Was great to see some rock and roll in a public space, surrounded by pretty books and records - really inspirational stuff.

What are your plans for Sparkspitter in 2014?
There are some real exciting events already taking shape for later in the year which we are really looking forward to. More immediately though we're supporting one of our favourite Adelaide bands The Shaolin Afronauts at their post-Japan pre-Glastonbury show at the Gov this Saturday (14th June) alongside Immermann 1.1 and Oisima which will be loads of fun. Mainly though we are looking forward to releasing our debut album Techne later this year, making some more film clips and probably touring to wherever we can go, although we don't have anything lined up as yet. 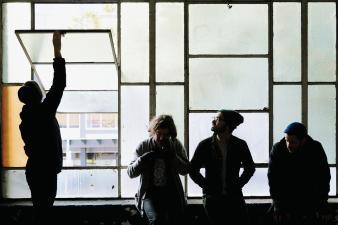