Hailing from the beachside town of Wollongong, NSW, 18-year-old musician Stevan is a young musical powerhouse on the rise. The multi-talented producer, singer, songwriter and multi-instrumentalist combines his many musical skills to create woozy, dreamlike pop songs that defy genres and classification.

Influenced in his early adolescence by his father's cassette collection which featured musical greats such as Bob Marley, Al Green and Stevie Wonder, Stevan began to develop an interest in music and taught himself the drums. Soon after his older cousin came to live with his family and exposed Stevan to his collection of underground hip hop mixtapes and bootleg mp3s from the likes of Childish Gambino, Frank Ocean, Kendrick Lamar and Joey Bada$$ which he immediately connected with. This musical discovery deepened his interest in music and the collision of the classic and contemporary is evident in his sound today, which infuses classic R&B songwriting with modern production.

Stevan expanded his musical ability and taught himself guitar by watching live videos of John Mayer on YouTube and started making beats by emulating production masters such as Pharrell Williams and Kanye West. Over time his musical prowess evolved and he began putting demos on Soundcloud, quickly gathering a loyal underground fan base and attracting industry attention. The last 18 months have been a time of rapid change for Stevan, including recently graduating from high school, he was signed to the US label Honeymoon Records (an imprint of Lyor Cohen’s 300 Entertainment) alongside a notorious roster that includes the likes of Rejjie Snow and Anna Of The North. On top of all of this, Stevan has became Astral People’s latest management signing sitting alongside fellow Australian artists like Cosmo’s Midnight, Winston Surfshirt and Milan Ring.

His debut single ‘Time’ boasts Stevan’s greatest songwriting to date featuring laid back guitar licks, lo-fi drums and instantly catchy vocal harmonies. With an arsenal of musical talent and a devoted fan base, Stevan is on his way to big things.

I started developing my sound by trying to re-create songs and styles that affected me when I was younger. Stevie Wonder, Pharrell, Moses Sumney, Mac Demarco, Dev Hynes, Dr Dre, and so many more influenced me to incorporate hip-hop soul jazz and rock into my music.

Life experiences it sounds generic but I pull a lot of my inspiration from events in my life or in the lives of people around me besides that the music itself like chord progression and melodies inspire the tone and feel of all my music.

What can punters expect from a Stevan live show?

It’s next level I’m not hyping it up but I’ve got great band members who bring their own style to my music and elevate it to a different feel, all of my band members come from Jazz back grounds and it bleeds into the live set up plus we add whole sections to songs, I’m very keen on playing on of them

My Dad and it was simple but he told me to follow my heart and to do what I love, there have been moments when we haven’t seen eye to eye but even then he respects my passions and believe that I can do whatever I set my mind to that type of confidence he has in me makes me feel like I can,

Scott Green. Kids played that at every party in High School.

I recently went to see Rejjie Snow at Metro theatre I went with some mates it was a really fun experience it was like my first time seeing a proper live rap show.

Tell us about the bands or people in the Illawarra music community that inspire you.

There aren’t a lot of people in Wollongong that are making music like mine but in Sydney Cosmo Midnight, Winston SurfShirt pretty much every artist on my Astro people, big shout out to Selasie Wussah and M.A.C they are Sydney artist who’ve supported me and kind of mentored me in my early days. My biggest inspiration in Australian music is actually from Brisbane his name is Rei So La trust me he’s the next big thing.

Releasing more music I’ve got so much and I want to keep making more and showing my stuff to the people who want to hear it, I guess I’ll be playing more shows and meeting new artist I want to set myself up for bigger opportunities 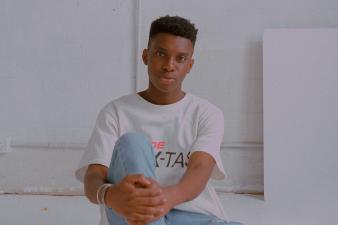 Defying genres is accurate and a skill that is flexed to its fullest here with "On My Mind." STEVAN switches from dreamy soft vocals to quick fire bars. Anytime I hear a talk box or something that even resembles it I am won over. Kevin Abstract should..

Defying genres is accurate and a skill that is flexed to its fullest here with "On My Mind." STEVAN switches from dreamy soft vocals to quick fire bars. Anytime I hear a talk box or something that even resembles it I am won over. Kevin Abstract should..

Fresh as a daisy Stevan! I've got butterflies. The way this washes through is just divine. Effortless flow, gorgeous mind!

Fresh as a daisy Stevan! I've got butterflies. The way this washes through is just divine. Effortless flow, gorgeous mind!

you've cracked the code for classic warm indie pop, yet every song you're bringing something different to the table. it's exciting! this time around, there's no looking past the future-facing electro breakdown and the hip hop influence in the verses.

you've cracked the code for classic warm indie pop, yet every song you're bringing something different to the table. it's exciting! this time around, there's no looking past the future-facing electro breakdown and the hip hop influence in the verses.