Experience the surfie indie-rock that is Stillwater Giants. With their driving rock and roll characterised by the brotherhood of duelling guitars and epic three part voice harmonies, the Giants of Margaret River launched their debut 6 track EP in August, 2011.

After originally being Unearthed by Triple J to play the Groovin' the Moo festival and being selected as a Triple J Unearthed Next Crop Artist, they have cut a swathe through the venues of Australia, warming up the stage for some of the country's finest bands like Birds of Tokyo, Eskimo Joe, Sticky Fingers, Ball Park Music, British India, The Rubens, Regurgitator... and many more...

They're no strangers to the festival stage either, having clocked up slots at Future Music, Parklife, Southbound, St Kilkda Festival and many more.
The lads were also given the unique pleasure of being the first ever band to perform at the brand new Perth Arena in November, 2012.

The lads have toured around Australia on numerous occasions and also recently capitalised on success with US college radio airplay, venturing over America to play shows in New York City as a part of the 2013 CMJ Music Marathon.

Surfer guitar licks and some really spot on three part harmonies. That's Stillwater Giants, they're our Feature Stars on triple j Unearthed and Unearthed on digital radio. You'll also be able to catch them at Groovin' The Moo opening the festival in Bunbury May 19th.

Our sound is a fusion of our individual influences, varied from funk to rock to pop to jazz and the occasional hyper-meta-sludgecore/classical concerto. We came together through the network of crew from 'down south' - Margaret River - jamming in our little cottage on a vineyard and drinking lots of red wine. Did a heap of demo recordings in the back room of a friend of ours, which, through listening back to ourselves proved essential in developing our sound. Our music is characterised by the vocal harmonies of our three castrated singers, and the incredibly original C major scale guitar work...

You guys are the Bunbury winner of our Groovin' The Moo competition. What can GTM revellers expect from a Stillwater Giants live show?

Nudity, obscene language, and a One Direction cover... We have decided to release (earlier than planned) a brand new single 'Walking On Air', exclusively for triple j Unearthed and Groovin' the Moo, so look out for that one. Might even bust the mandolin out for a stomp.

What are you most looking forward to about the Bunbury GTM on May 19th? Who are you excited to see?

Meeting some new bands, making the most of the rider and not having anywhere to sleep after the festival. We are taking a party bus down from the city with a bunch of crew, so should be a pretty solid weekend. We'll definitely be in the crowd for Mutemath, and Digitalism also.

We actually all met in an East Perth lockup, and from this the best advice we have ever received was a female police officer telling us to sort our lives out, get real jobs and have a shave. Had a shave yesterday, and incredibly managed to talk to a girl last night without getting slapped so it was pretty solid advice!

Early September 2012 we will release our second EP, a 6 or 7 track. Off this we will tour nationally at the end of the year, and we are looking at making the move over east next year. Got a whole heap of songs almost finished in the studio now that we are frothing on, it's really hard not to just release them straight away!!

Moving in the direction of the hyper-meta-jazzcore-progressive-sludgegrind-dissonant-antichromatic genre. It could also be defined as triple j Unearthed!! 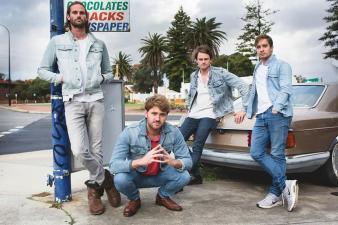 Those Girls That I Meet

Driven, high energy guitars. This is a lot of fun.

Driven, high energy guitars. This is a lot of fun.

How nice to have a brand new one from the Stillwater Giants guys! This one has plenty of pace and bounce to it, much like my right arm mediums.

How nice to have a brand new one from the Stillwater Giants guys! This one has plenty of pace and bounce to it, much like my right arm mediums.