Good luck to anyone rocking up late to The Foundry for A Swayze & The Ghost because the
room is rammed..Their set is fast and scathing and easily a BIGSOUND highlight for 2018 – The Music

One of the most talked about artists at BIGSOUND was A. Swayze & The Ghosts…the
Hobart band have a live show in prime condition. It’s unpredictable, risky and unhinged and
it’s impossible to take your eyes off frontman Andrew Swayze…you feel alive watching these guys. – Declan Byrne, triple j

An unhinged rock’n’roll party band from Tasmania that are a very important reminder that garage rock is still the best style of music when it’s done well. – Double J

A. Swayze & the Ghosts have released their new single ‘Suddenly’, the accompanying video and announced a string of shows across October and November.

“‘Written in one session, listening back to the original phone recording, not
much has changed. It’s really important to all of us that we capture the
urgency of our live shows on record, and with ‘Suddenly’ we found a balance
between some our more garage-y punk roots, and the more complex and
interesting writing styles that we have been striving for.”

A. Swayze & the Ghosts have performed at Falls Festival (winners of the triple j unearthed competition to perform), MONA Faux Mo, A Festival Called Panama, Boogie Festival, Cherry Rock Festival, Bad Friday Festival, By the Meadow and Bigsound, as well as playing alongside Jet, The Vines, Batpiss, Cosmic Psychos, Shame, Total Control and The Stems.

The band’s most recent shows as part of Bigsound created a big buzz amongst
punters and industry alike, earning spots in many ‘best of’ lists across STACK, triple j, Double J, The Music and more.

‘Suddenly’ follows A. Swayze & the Ghosts’ 2017 self-titled debut EP, and is the start
of a new chapter for the band.

Get to know your Marion Bay Falls Festival winners, A.Swayze & The Ghosts. Taking garage punk to a whole new level, their live show is a must-see of energy, chaos and a whole lot of fun.

-50Tell us about your music. How did you develop your sound?

We started writing together in our share house about three years ago in a cramped messy bedroom occupied by the most eclectic assortment of items. Initially, we had altered our sound with guitar pedals and even had a Roland Space Echo to run our vocals through. The trouble was, we (I) always seemed to lose our gear – in pubs or the messy bed/studio/rehearsal room – so in turn, we were forced to use less and less equipment. Our songwriting quickly became about plugging in and just going for it relentlessly, and now I think we owe a portion of how we now sound live and recorded to a forced appreciation of the minimal.

We all bounce off each other with such energy when we plug in our instruments. From the get-go, there are ideas flying back and forth around the room and suddenly we’re completely engrossed in writing a song or something. Each of us seems to share a long-standing “addiction” of sorts to writing and performing songs. Constantly thinking about creating music, definitely helps with turning everyday encounters into inspiration for the songs we write.

What can punters expect from an A. Swayze & The Ghosts live show?

There will be a ‘soup’ of beer, sweat and sometimes blood on the stage by the end of a set, which always seems vulgar in hindsight, but it’s all just the bi-product of the high we chase from gigging. We started off as a trashy unrehearsed band and would often not make it through a set without some self-inflicted catastrophe. Nowadays the trashiness has (kind of) faded, we have more spatial awareness, and we know our songs, but the chaotic energy has remained the same.

What’s the best advice you’ve been given and who was it from?
“Invest in Bitcoin.” – Hendrik Wipprecht (2012).

Great advice, although I never heeded. The power of hindsight is amazing.

I honestly don’t have an answer.

Sadistically? Well if they were a Bowie fan, Gang of Youths’ cover of ‘Heroes’.

Yothu Yindi –'Treaty'. I’ve always loved the remix by Filthy Lucre, even as a child I had the single and would thump around to it in my bedroom.

We were fortunate enough to get the local support for Total Control when they came to Hobart with Terry. It was a gig we wouldn’t have missed if we hadn’t been playing, as we’re all long-time fans of TC. It was at The Brisbane Hotel, which for us, is a familiar and iconic music venue in Hobart. The room was packed with a hoard of drunk punters all anxious for the music, the whole vibe of the place was warming. The thing that makes a great local gig is the energy and excitement the folks of Hobart bring, I love it. And of course, TC were amazing.

Tell us about the bands or people in the Tasmanian music community that inspire you.

We’ve had the support of so many outstanding people in the Tasmanian music scene: makers of music, publishers, and listeners alike. The community down here is not like any other major city we’ve spent time in, given the fact that everyone knows each other here - musical genres and cliques aside. Probably due to the population size and limited venues, bands from various ‘scenes’ play with one another and there are never enough punters involved for a specific ‘trend’ – which is very encouraging for honest creation.

All great people doing massive things for the music community in Hobart.

It’s clear that 2017 is going to close with us sleeping in tents at The Falls Festival in Marion Bay, as we will be gracing the stage there on New Year’s Eve. We’ve all been busy writing in our spare time and now that our EP release/tour has wound up we’ll start spending more of our days putting new songs together.

Recently we started construction on our own studio in a shared warehouse with some visual/sound artist mates of ours. Zac (drums) and Ben (bass) are both pretty involved with production down here, and we wanted a space of our own to get busy in, so this studio is both exciting and convenient.

Other than that, we have a bunch of interstate shows lined up for 2018, so people keep your ears and eyes out for an A. Swayze show near you! 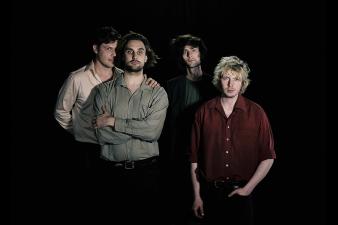 Big ups to our Falls winners!

I love this band and I love this song and I can't wait to once again be drenched in sweat and beer, watching you smash it out on stage.

I love this band and I love this song and I can't wait to once again be drenched in sweat and beer, watching you smash it out on stage.