After casting a spell on all with her debut EP, ‘Rosie’, Thelma Plum has put down her guitar and taken a step in a brave new musical direction.

With Triple J Unearthed, NIMA and DEADLY wins under her belt, Thelma relocated to the Inner West of Sydney, absorbing the city and its sounds, developing her craft to expand beyond the 6 strings.

Collaborating along the way with beat smith, M-Phazes (Kimbra, Eminem), lending his sought after talents to sculpt a sound that is forward thinking and modern without compromising Thelma’s warm colloquial purr.

‘How Much Does Your Love Cost?’ is the first single off Thelma’s forthcoming EP, ‘Monster’ and is mixed by Eric J Dobowsky (Chet Faker / Flight Facilities)
Opening with the jangle of an Ennio Morricone western score, Thelma’s voices commands focus as a crescendo of strings builds beneath, breaking into a truly hypnotic chorus.

Still only 19, Thelma is already a seasoned performer, completing a run of SOLD OUT national shows in 2013. Now, in 2014, Thelma has will be bringing her Monster to a town near you – best be on the look out..

Thelma Plum is an incredibly talented seventeen year old singer-songwriter from Brisbane. She is the winner of our National Indigenous Music Awards competition and will be flown to perform at the awards in Darwin on August 11.

I've been singing and writing music ever since I can remember, one day I decided to pick up a guitar and I suppose the rest just followed.

You’re the winner of our National Indigenous Music Awards competition. What most excites you about being flown to Darwin to play the awards?

Everything! I am super excited to be playing alongside some amazing artists that I have been listening to since I was a child. I think I may be a little bit starstruck when I get there.

Brisbane music scene has always been my favourite. So many talented artists and people. I'm very lucky to have a supportive network of friends that are involved in the music industry around me. Steve Grady is a friend I play with sometimes who inspired me to start playing in the first place, I remember the first time I heard him play I wanted to be just like him! Brett Wood who runs Starving Kids has had a huge impact on my music career so far, he was actually my principal in year 11 and 12 too!

"Always listen to what your parents say". All the time there is something that I am stuck with and my parents give me great advice.. even if I don't agree with it at the time, then I always look back and think "Man I wish I listened to my parents". 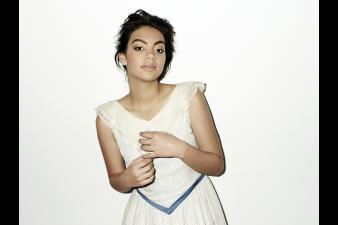 Thelma’s music hits on multiple fronts; her acoustic craft is well developed and manages to sound both hushed and warm at the same. Her songwriting too is impressive with a disarming charm to her lyrics.
More

an amazing voice from an obviously talented up-n-comer. Very excited to see what Thelma has in store

an amazing voice from an obviously talented up-n-comer. Very excited to see what Thelma has in store

Love the name, and love the voice, but this feels like a sketch of a better song waiting to be fleshed out.

Love the name, and love the voice, but this feels like a sketch of a better song waiting to be fleshed out.