Them Swoops are a duo from Melbourne, Australia formed by Dave McGann and Chris Goff in early 2012. They began as a studio project and their first recording session resulted in an early version of ‘Work Around It. A demo of that song was soon added to Triple J rotation with comments from Triple J presenters like “Completely sold on Them Swoops” (Dave Ruby Howe) and “Another Amazing Tune” (Nicole Cheek). Shortly after, they were crowned winners of the Triple J Unearthed Fuse Festival competition and were flown to Adelaide to perform what would be only their fifth live show. Since then things have really started to happen for the band with a string of great support shows with the likes of The Maccabees, San Cisco, The Rubens, Ball Park Music, and Last Dinosaurs plus touring the east coast as part of the Triple Treat Tour. They then capped of 2012 selling out their debut headline show in Melbourne. Here is what a few have had to say… “… a fantastic taste of things to come.” – Tonedeaf “Them Swoops are a band to keep an eye out for...” - Indie Shuffle “Them Swoops have had a big year for a band that’s not even one year old, and after seeing them live, it’s not hard to see why.” – Music Feeds "Them Swoops, you better start remembering the name." - Fake Plastic Tunes Originally championed by Triple J, word has spread to the other side of the globe with ‘Work Around It’ added to influential USA radio station Alt Nation, the same station credited with breaking ‘Foster The People’ and ‘Phoenix’ in the US market. ‘Work Around It’ continues to grow in popularity at the station, frequently appearing in the 'Alt 18' most requested tracks and in the stations Top 20 most played songs each week. ‘Work Around It’ was officially released in late 2012 and in a little over 2 months has achieved over 40,000 streams across YouTube and Soundcloud, and sold over 4,500 singles in the USA and Australia. Them Swoops have just finished recording their debut EP titled Glimmers, which was recorded by the band themselves in Melbourne and mixed by Mark Needham (The Killers, Imagine Dragons, Youngblood Hawke) in Los Angeles. Glimmers is slated for release in early 2013 and in the meantime the second single ‘Too Fast For Love’ is out February 12.

Them Swoops are a Melbourne trio bringing you sunny rays of catchy-as-hell indie pop. Hello Summer!

We try to make music that is attention-getting but not obvious. It's important to have a little immediacy i think, but we also try to throw in ideas or changes that give things a little difference or a twist. It's still guitar based pop music at it's heart but i like to leave room for other possibilities, we like throwing in crazy sounds here and there or having sections that breathe and aren't all about pop hooks. But yeah, we'll throw the hooks in too if we got some.

Them Swoops shows are really loud, fuzzed out exercises in rhythm. We have a tendency to shine things up in the studio but let the live show get a little raucous. Sections of songs have instrumental parts that sometimes swell up and around and grow in intensity. I like the dangerous vibe. That it's all just hanging together and could fall apart at any moment.

My high school music teacher told me to stay dangerous and to never settle on the first idea unless it's f#%king brilliant. Whether i've managed to stay dangerous or have a brilliant idea yet remains to be seen but it sounded cool.

Melbourne has an endless supply of amazing bands that give us inspiration. I'd be missing out so many but i'll mention Greasers, Parking Lot Experiments, Gosteleradio, Twerps, Boomgates, Eagle & the Worm, Dirt Farmer, Jimmy Hawk & The Endless Party, there's heaps more! We don't really sound like any of those bands but we definitely get inspired by them. We've also had great help from local producers Aaron Cupples, Jimi Wyatt & Glenn Musto recording us and mixing us when they can in some cool backyard studios and warehouses.

We aim to have an EP out in the first half and an album released in the second half. Hopefully play bigger and better shows, and tour as much as possible. Pretty much what any band wants.

...habit-forming, dangerously addictive and one of the leading causes of enjoyment in the country. 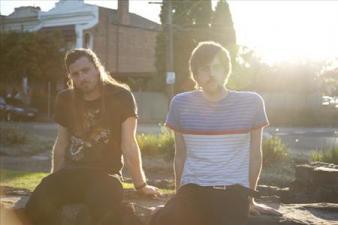 Congratulations to Them Swoops!

Sharp, fuzz guitar-psych wig-out chaos-pop from the future of your past.
More

Work Around It (Demo)

Completely sold on Them Swoops. When does my fan club badge arrive in the mail?

Completely sold on Them Swoops. When does my fan club badge arrive in the mail?