Tin Can Radio make the music that sounds right to them. The Brisbane 5 piece have laid low over the past little while, taking the last 12 months away from releasing and touring music, taking some time to rediscover themselves as a group.

That's not to say there wasn't music being made. Weekly regimented rehearsals turned to drunken exploratory free jam sessions. Songs devolved to sounds and then built back up again.

The songs on Tin Can Radio's forthcoming 'Mosaic EP' are the fruit from this process.

Tin Can Radio are a Brisbane-based 5-piece that have just released their smashing debut LP 'Chase The Sun, Hold The Night'.

I think the most important factor in the life and times of Tin Can Radio sound development has been the incredible musicians with ridiculously diverse backgrounds that have been a part of the project over the last 2 - 3 years. From glitch and dubstep producers, to pop gods, punk rockers, jazz junkies and funk cats...it's been a wild ride.

What are your earliest memories of seeing live Australian music?

Jebadiah supporting Custard supporting The Presidents of the USA at the Suncorp Piatza in Brisbane. I was about 12. Massive mosh pit, crowd surfing, I got up on my Dad's shoulders. It was world shattering for me.

We met this old 'retired musician' (as if musicians can ever afford to retire!) in a seedy bar in the Cross in Sydney. He regaled us with his tour stories for hours. One of which was a make shift washing machine. Step one...find blender. Step two...get washing powder. Step three...add water and powder to blender. Step four...add socks and blend. End result...Never put socks in a blender!

Tell us about the bands and people in the Brisbane music scene that inspire you.

The people inspire us. It's the guys that show up to every show of every band. The bedroom producers. The artists from other areas that pull together to make the shows happen, the dancers, the street artists, the photographers, the designers. Guys like Timeshare, Goldleader, The Kidney Thieves, The MS Crew, Irukandji, Georgia Potter, Yeo, Pocket Love, Temple St Studios.

So much music you can't believe. We are winding up a massive national tour for the release of our first album 'Chase the Sun, Hold the Night', that has taken us to WA, NT, NSW, VIC and all over QLD. The final show is THIS FRIDAY (20th May) @ THE ZOO in BRISBANE. We have a couple more singles to release from album. There are video clips on the way. Remixes by some VERY special guests. More touring. More recording. Living the dream! 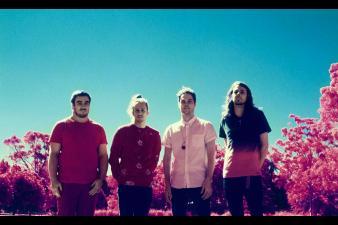 Congratulations to our 2011 NIDA winners!

These 6 lucky acts will have a live action video clip filmed for their track by a NIDA post-grad directing student.
More
More Reviews
Download the triple j Unearthed app: