Releasing their self-titled debut EP, and following in 2014 with another successful EP in ‘Eat The Sun’, Tora’s soulful electronic music has had them compared to seminal artists such as Radiohead and James Blake.

Tora (Origin; Greek, meaning ‘Now’) have kept up a continual progression since their inception, dropping an array of singles and collaborations, all whilst building a rapidly growing global listenership.
Tora have performed at Glastonbury, Falls Festival, Splendour In The Grass, The Great Escape UK and Canadian Music Week. They have also toured both in Australia and internationally with artists such as RUFUS, Miami Horror and SAFIA.

As an independent act, the band have been championed by global tastemakers including triple j, The Sound You Need, Indie Shuffle and The Line of Best Fit, and attracted the attention of LA-based producer Galimatias who’s remix/collaboration on Tora track ‘Jaigantic’ has since clocked up over 15 million streams online.

On April 28th Tora unveiled their brand new single ‘Another Case’, the highlight track from their debut album ‘Take A Rest’. Written over a two-year period in various locations around the globe and mastered by Andrei Eremin (WAFIA, Chet Faker, Hiatus Kaiyote), the band returned home over the summer of 2017 to complete the album.

Written, produced and mixed in house, ‘Take A Rest’ continues Tora’s DIY ethos as an elevated and captivating landmark release.

From playing cute gigs raising funds to help rebuild a local community garden, to smashing the stage at Splendour In The Grass, saying that Tora is moving forward in leaps and bounds is probably the understatement of the century. Check out our interview with this week's Unearthed feature artist.

We just wanted to make music that we enjoyed listening to, and so it slowly developed through combinations of influences, as well as many hours of trial and error and the process of elimination... Ideas usually develop within the computer, starting with beats and production, then live instruments and vocals. We then have the challenge of pulling them off in a live situation.

The biggest inspiration for us is hearing new music, because we often forget that there's an infinite pool of ideas to be manifested. This gets our creative minds juicing.

What can punters expect from a TORA live show?

We get pretty into it when were on stage, we don't take ourselves too seriously, so there's usually a bit of goofy dancing and silly comments throughout the set. We've been told that the songs sound more energetic and upbeat when we play live. Most people don't realise, but we have 3 vocalists and we play the songs with real instruments.

Our local community garden burnt down a little while ago, and they put on a fundraiser to rebuild it. We played a little set to contribute. It was super cute.

Tell us about the bands or people in the Byron Bay music community that inspire you.

Our close friends Gabe and Cecilia are musical geniuses, and inspire us through their crafty originality.
Potato Potato never cease to amaze us either, and they're always keen to jam.

We've got some exciting shenanigans planned for the rest of the year, now including our first ever show at Splendour in the Grass.

We just released "Eat the Sun" the first single from our new EP which will be out later in the year.

We are also super stoked to be going on tour with Miami Horror in september, which will include shows in Sydney, Melbourne, Perth, Adelaide and Canberra. 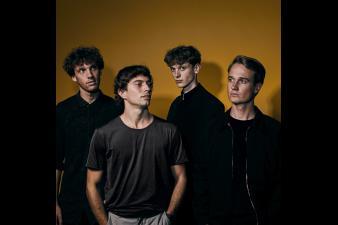 Congratulations to Airling and Tora

Airling has just been crowned this year's national Unearthed Splendour in the Grass winner, and Byron Bay five-piece Tora are our local winners.
More

Heard this one on Tops last night as I was heading home. Vocals so smooth and charming, lost myself in the track and missed by bus. True story.

Heard this one on Tops last night as I was heading home. Vocals so smooth and charming, lost myself in the track and missed by bus. True story.