Verge Collection are the winners of our Southbound competition and will be taking their triumphant, feel-good songs to the festival stage in Busselton, WA in January 2016.

Tell us about your music. How did you develop your sound?
Our sound kind of came about from my own limitations as a musician. For the most part our songs have come from demos I've recorded and then sent to the guys, so a lot of the time they are playing bits or impressions of bits that I've written. It sets pretty massive constraints on what would be considered too technical, so we just work with what we've got.
What’s your greatest source of inspiration for making music?
Re-listening to Paul Simon's Graceland, gets me every time. The way he spins his words and places them across the songs is amazing and effortless.
You're the winners of our Southbound competition and will be playing the festival in January 2016. What can punters expect from a Verge Collection live show?
We try to keep it pretty unpredictable in terms of planning who is playing with us and what we are playing, so we're usually as surprised as the audience is. Also, we sometimes throw in an awful cover of Say My Name, we do that for us, 'cause at least we enjoy it.
What’s the best advice you’ve been given and who was it from?
You make your own luck. Life advice is always pretty cheesy, but yeah I definitely stand behind that one.
I think my dad told me that, I doubt he ever said it in such a succinct way, but thats what I took away from it.
What Australian track would you play to cheer up someone who was crying?
Icehouse - Electric Blue
What Australian track would you play to someone to make them cry?
You Am I - Heavy Heart
You’re the DJ at a party. The dance floor is pumping. What Australian track do you put on next?
Paul Kelly - Dumb Things
What was the last local gig you went to? How was it?
We played with The Creases pretty recently, I did watch their set so I guess that counts. But it was massive and Kitchen People were insane.
Tell us about the bands or people in the Perth music community that inspire you.
Big fan of this band called The Government Yard, they have this song 'Mining Daughters' that just rips shit on Gina Rinehart which is a pretty easy message to get behind. Also people like Greg Sanders (Gun Fever), the guys from Doctopus and all the guys in Pat Chow are just super genuine and really fucking good at boosting morale. Also a massive shout out to Blake Hate from The Sperts, this guy religiously put us on punk bills for a while when we were starting out, super supportive guy.
What are your plans for the rest of 2015 and into 2016?
We've got a few things sussed, Southbound is shaping up to be a mental party, some more releases, some shows at venues that aren't in the neighbouring postcodes to where I live, lots of great things, but I think we'll just wait to announce all that stuff so if it falls through I don't look like an idiot.
View Profile Hide Interview 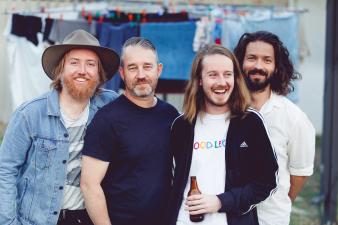 how can you not side with verge collection after hearing this honest, relatable, catchy one that somehow feels comforting among a very not comfortable sitch.

how can you not side with verge collection after hearing this honest, relatable, catchy one that somehow feels comforting among a very not comfortable sitch.

Chuggin along to this one while doing my errands today. Sweet easy going stuff from VC!

Chuggin along to this one while doing my errands today. Sweet easy going stuff from VC!

Swimming in charm, style and lots of sunny tone in those guitars. A huge sucker for this and how self realised the songwriting is.

Swimming in charm, style and lots of sunny tone in those guitars. A huge sucker for this and how self realised the songwriting is.