Sometime in the summer of 2008, a young Doug Wright (recently returned from a year in far-off Switzerland) found the perfect synth on eBay. Biding his time, he planned to pounce at the right moment… Simultaneously, at a secret location, deep in the picturesque Blue Mountains, brothers Peter and Russell Fitzgibbon were watching the same synth on their computer screen, mouse-clicking fingers getting ready to spring… After losing the bidding war, Doug heard on the grapevine that the brothers had scored a sweet new Roland Alpha Juno 2 on eBay. He immediately fronted up to the Fitzgibbon house, demanding they form a band together so he could play it. “I lost a synth but won some friends,” says Doug nostalgically. United by a mutual love of sun-drenched harmonies and shimmering melodies, with a secret guilty serve of smooth grooves on the side, the trio put their minds together to bring We Say Bamboulée into being.

Blue Mountains-based trio We Say Bamboulée make a cheerful brand of noise-pop, which weaves folk-inspired harmonies through waves of synthesisers and energetic beats.

Doug was living in a small alpine village in Switzerland a couple of years ago, and started producing songs in his host family's basement. Once back in Sydney, we got together under the guise of We Say Bamboulee and started jamming the songs on synths and drums. So I guess we use the tools of electronic musicians, but play them like we're a guitar band or something. BOOM. sound developed.

What can the Big day Out audience expect at your show?

Actually, there's a real treat planned for anyone that comes out to see us! We're hoping to get the members of Tool and Rammstein up to sing harmonies. People will freak right out.

Who are you looking most forward to seeing at the Big Day Out?

Well, we just put out an EP called BUSH TRICKS so we're hoping to be getting around Australia in the new year to support it. We are also planning on canoeing down the Colo river at some stage, we're figuring out the logistics of where it fits in the schedule. Apart from that, we'll just be keeping cool over summer, writing more songs and maybe releasing more tracks in 2011.

Snakes in your synths, barramundi in your bass, goannas in your guitars, dingoes at your drums. 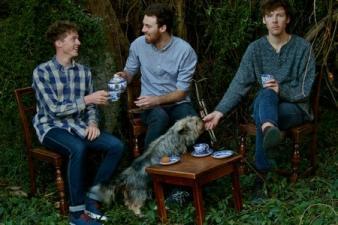 We Say Bamboulee seamlessly merge Yeasayer with The Postal Service and add a shit load of their own unique charm. Really looking forward to hearing more

We Say Bamboulee seamlessly merge Yeasayer with The Postal Service and add a shit load of their own unique charm. Really looking forward to hearing more