Heaps going on all the time, just like anyone, but keeping our nose to the grindstone.

Been away for a minute with Reading, Leeds, Pukkelpop, national Living End tour, triple j's Like A Version, ARIAs, India, Falls, but got a new song recorded in-between it all.

Called 'Tops', and its the first new stuff in almost a year.

'Tops' is about feeling anything-but. Rev says it like this, "This song is about those times in your life when you know you should feel so fucking good about yourself, but all you can focus on is negative."

Nick Astanei shot a nice vid for us, and took our photo. Which you can see above. Talented boy.

First new music in almost a year from West Theb, headed out to tour it round the country in May and June 2019. Details at westthebarton.com

West Thebarton Brothel Party are one of the winners of our Groovin The Moo competition. They want punters to leave with a sore neck and beer-soaked hair after they take the stage at Groovin The Moo in Oakbank on Monday April 25.

Read Interview
Tell us about your music. How did you develop your sound?
I like to think that we write tunes that are relevant, soulful and have a whole lot of character. When we write, as the singer, I generally try to think of one or two phrases in my mind, let them razz me up a whole bunch and then just try and steer the song towards something that fits this. It’s a little weird to describe how we write, but it usually comes down to 1 or 2 people writing the guts of a track and then bringing it to the shark tank.
What’s your greatest source of inspiration for making music?
Four Words. Eight Syllables.
Eddy. Current. Suppression. Ring.
You’re one of the winners of our Groovin The Moo competition. What can punters in Oakbank expect from the West Thebarton Brothel Party live show?
We’ve been playing fewer local shows lately. Focussing on quality rather than quantity, so that when we do play shows, we can just unload all of that pent up frustration and energy on stage. Punters can expect to have a sore neck by 12.40 in the arvo and I dunno, maybe get a bit of beer in their hair. Oh, and see us actually enjoy some room on stage for once.
What’s the best advice you’ve been given and who was it from?
“Rock Hard, Rock Often, Do it Weird” – David Blumberg (Exeter Bartender)
What Australian track would you play to cheer up someone who was crying?
Down The Lane by Royal Headache
What Australian track would you play to someone to make them cry?
Year In Pictures by Dick Diver
You’re the DJ at a party. The dance floor is pumping. What Australian track do you put on next?
Tough One… Television Addict by The Victims or (if it was a party in Adelaide) Hoping For by Bad Dreems.
What was the last local gig you went to? How was it?
I dropped in at a bar called Tuxedo Cat for a beer after the Port game and I caught a singer called Abbey Howlett. I’ve seen her a few times, and its always been her voice that blew me away, over her subtle jazz chords. But she flipped her set for this gig, chucking some electronic shit over her guitar. It was VERY, VERY good. Even had a Dialect (From Dialect & Despair) cameo.
Tell us about the bands or people in the South Australian music community that inspire you.
Haha, this could be a VERY long list. I guess most of our inspiration comes from bands that work their asses every day of the year. Its bands that do this, that have really made us kick into gear to keep up. Ones that come to mind are; Bad//Dreems, Wireheads, The Hard Aches and Sincerely Grizzly. When you see a band that you want to play with, generally it gives you a bit of honest competition to want try and be in their league, and really, I think that’s what drives us all.
What are your plans for 2016?
Write songs, release songs, tour, repeat.
Oh and try to write less songs in the key of E.
View Profile Hide Interview 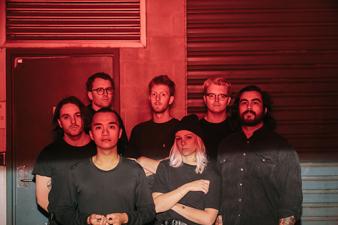 the rock n roll gods will look back in 20 years and smile when they go through the full west theb catalogue. this will get them sweaty and impassioned.

the rock n roll gods will look back in 20 years and smile when they go through the full west theb catalogue. this will get them sweaty and impassioned.

"Too lit to quit" is also veeeeerrrry apt for this band. Power and passion in overdrive - West Thebarton is vital for right now.

"Too lit to quit" is also veeeeerrrry apt for this band. Power and passion in overdrive - West Thebarton is vital for right now.

An honour to be getting another upload from you guys. I could cry. DAY. MADE. Love you guys, love this song. It rules.

An honour to be getting another upload from you guys. I could cry. DAY. MADE. Love you guys, love this song. It rules.