triple j radio awarded WHARVES the “Unearthed” spot to open Splendour in the Grass 2017. This was off the back of their release ‘Man You Want Me to Be’.

The band went on to support bands like Ocean Alley, Wolfmother, Rolling Blackouts CF, The Living End, Polish Club, Kingswood, Eskimo Joe and more. They have played major music Festivals including Splendour, Falls Festival, Festival of the Sun, and Bigsound.

2019 saw WHARVES joining forces with renowned Aussie band DZ Deathrays on a tour of Europe and the UK. UK radio support came with BBC1, Radio X, Amazing Radio and Manchester XS supporting the band’s new tracks in 2019 and 2020. Notable promoter ‘This Feeling’ has the band booked for a return tour to the UK as soon as possible.

With COVID-19 disrupting all preconceived plans and ideas for 2020, the band hit the reset button and built their own studio in an old shed in Ballina, NSW. ‘Think Straight’ was the first taste of the band’s self-produced and self-recorded effort with massive track 'Everything I'm Waiting On' the next. The result has seen them take ownership and confidence in their sound. Their sophomore EP is due in 2021 with a return to national and international touring (hopefully) in the near future.

It's time to get sweaty with indie-rock quartet WHARVES, as they take over Splendour In The Grass this weekend as our Unearthed comp winners!

Read Interview
Tell us about your music. How did you develop your sound?
Developing our sound was pretty much a trial and error situation where we would write songs, test them live and then fix the parts or get rid of the songs that we weren't happy with.  We have transformed the pool room in Mike's parents' house into WHARVES HQ where we write, record and rehearse.
Mikes dad is annoyed that he has lost the use of his beloved pool table that he never used, but it was a sacrifice we were willing to make. Steven Schram has produced our last two singles and we have certainly gained a lot from working with him.
What's your greatest source of inspiration for making music?
We are all huge fans of music. Watching bands smashing it out on stage or listening to an awesome album makes us want to do the same.
What can punters expect from a WHARVES live show?
Four sweaty dudes on stage, bouncing around like a beach ball at a Nickelback concert.
What's the best advice you've been given and who was it from?
We supported Polish Club in Byron Bay and we had a few beers with them before the show. They were telling us to always work with people that really care about your music and are passionate about what you do (makes sense, right?).  Top blokes.
What Australian track would you play to cheer up someone who was crying?
Bad//Dreems and their track 'Feeling Remains'. If this doesn't get you jacked up, then you must be a robot.
What Australian track would you play to someone to make them cry?
Nick Cave and The Bad Seeds and their track, 'Into My Arms'. Shares in Kleenex must have skyrocketed when this song came out.
You're the DJ at a party. The dance floor is pumping. What Australian track do you put on next?
Luke Million and his track 'Arnie'. We lose our biscuits when this banger comes on. An absolute must have in any party mix. P.S. Matt has a mad party mix - it's on Spotify if you wanna check it out. We're looking forward to checking his set out at Splendour!
What was the last local gig you went to? How was it?
We went and saw Tora, Mookhi and Angie Hudson at the Northern in Byron Bay a couple of weeks ago. Huge lineup and that light show was lit! There were more lasers than the 'Lasers Only' mode on GoldenEye '64.
Tell us about the bands or people in the North Coast, NSW music community that inspire you.
Mario from our local record store in Byron Bay, Howl and Moan Records, is really creating a music scene in the local area. We've played and been to gigs at his shop and it's always an awesome vibe.  Plus, we always walk out with a new vinyl!
We are also really lucky to live in an area that has some seriously amazing festivals such as Splendour in the Grass, Falls Festival and Blues Fest. How could you not be inspired seeing your favourite band thrash it out to thousands of people?
What are your plans for 2017?
We've actually got some new music being released very soon as well as a tour, which we're really looking forward to. We have a couple more exciting things on the horizon but they're more secretive than Mr Krabs' Krabby Patty recipe.
View Profile Hide Interview 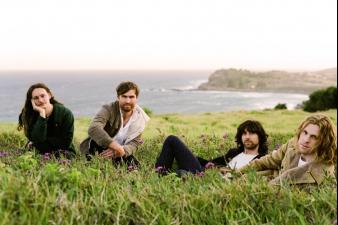 The Byron legends playing Splendour In The Grass thanks to Unearthed.
More

Everything I'm Waiting On

this is like watching different coloured paints being swirled together in slow motion. it's a mesmerising, multi-coloured experience that you want to dive in again and again.

this is like watching different coloured paints being swirled together in slow motion. it's a mesmerising, multi-coloured experience that you want to dive in again and again.

Everything I'm Waiting On

WHARVES have blessed us with this starry indie rock journey. I'm picturing the band on stage at Glastonbury and it's been proper pissing down rain but they start playing this track and the sun suddenly creeps through to cheers from the exultant crowd.

WHARVES have blessed us with this starry indie rock journey. I'm picturing the band on stage at Glastonbury and it's been proper pissing down rain but they start playing this track and the sun suddenly creeps through to cheers from the exultant crowd.

A thoughtful, endearing, emotional hit from a band who keep levelling the eff up. Yep, I hear that woozy Tame touch too. It's got this great immersive feel. I hope you're feeling really proud of this one!

A thoughtful, endearing, emotional hit from a band who keep levelling the eff up. Yep, I hear that woozy Tame touch too. It's got this great immersive feel. I hope you're feeling really proud of this one!