***NEW SINGLE - HIGH ft. ALIANAH*** NEW FILM CLIP: http://www.youtube.com/watch?v=p8BOezJk4vc www.facebook.com/wolfwolfmusic DOWNLOAD FULL (OLD) ALBUM FOR FREE HERE: http://www.mediafire.com/?dmgo3wsmni352hq A longterm musician, Wolfwolf started his musical journey infront of a piano at the ripe young age of 3 years old. Classically trained, he explored and conquered several instruments including the Violin, Trumpet, Trombone, Drums and Guitar before later moving onto more modern movements such as turntablism. Wolfwolf has come through bringing the funk back! With influences coming from 1980s groups such Chimere and Hot Streak mixed with more modern producers such as Onra, Dam-Funk, Oddissee and Machine Drum, his style of music can only be described as futuristic funk. www.soundcloud.com/wolfwolf-music www.twitter.com/wolfwolfmusic

Mysterious Brisbane producer Wolfwolf is one of the winners of our Parklife competition and will be pumping out his synth-heavy funk jams at Parklife Brisbane this Saturday Oct 1st.

I always had a love for records and developed a decent collection of anything from 1960s opera to the latest Hilltop Hoods release, in that, I had collected a lot of 1980s electro funk which I always used to put on at parties to get people dancing. The music always had such a lively upbeat feel to it and after going through a breakup with a girl I started listening to it more, then making it, then releasing it! The album I released was titled "Happy Heart Breaks" as it was literally the music that made me feel happy through my heart break.

You are one of the winners of our PARKLIFE competition and will be playing PARKLIFE in Brisbane – what are you hoping to gain from the experience?

I am SUPER happy about being given the opportunity to play Parklife and I am really looking forward to playing infront of a larger audience and seeing how these big festivals operate behind the scenes. Also looking forward to meeting some of the well-respected artists that are performing on the same day.

What can PARKLIFE punters expect from the Wolfwolf live show?

A lot of gadgets, punchy kicks and snares, lots of synth solos, dancing, epic breakdowns and maybe a remix or two ;)

There is not too many people in Brisbane that make music like mine so I get inspired by the drive from local musicians to get their music heard. An artist by the name of Tigermoth really helped me get me get in the right mindstate to finish my album (even though he probably doesn't know it), Andy from the Belligerents really inspires me too.

I'm working on a concept synth EP with a singer at the moment that I hope to release onto Triple J Unearthed and Soundcloud later this year whilst working on my 2nd studio album which we have huge plans for. The new album should be coming out early next year. I also plan on doing a lot more interstate shows (if I can get them) and developing the live show.

......becoming a lot more diverse and accepting of different styles of music. 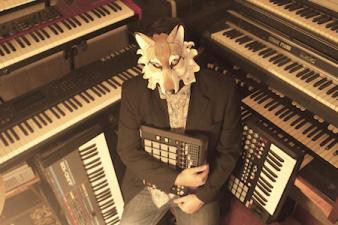 Congratulations to our 2011 Parklife winners!

These five lucky acts will be taking the stage at Parklife 2011!
More

Oh dayumn, I missed new WolfWolf?! No matter, demz squelching synth bass and phat riddims still get me going. Guest vocalist hasn't got game - she's got all the games. On serious not - am (inevitably killer) debut LP from this cat can't come soon enough!

Oh dayumn, I missed new WolfWolf?! No matter, demz squelching synth bass and phat riddims still get me going. Guest vocalist hasn't got game - she's got all the games. On serious not - am (inevitably killer) debut LP from this cat can't come soon enough!

Again with the Wolfwolf awesomeness! Such a consistent producer knocking out the finest in slinky, effortless disco funk.

Again with the Wolfwolf awesomeness! Such a consistent producer knocking out the finest in slinky, effortless disco funk.